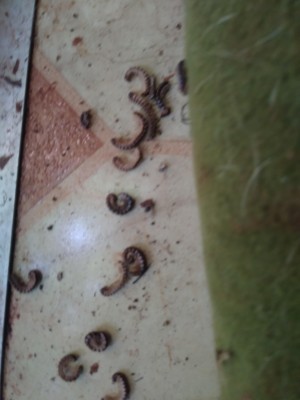 A reader of ours recently sent in this image of a cluster of brown worms he found outside. The worms appear brown in color, with a segmented body, and many of them are curled up into a ‘C’ shape. 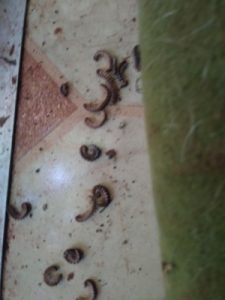 First and foremost, we wish to thank our reader for providing a clear image of the worms, as this has made it easier for us to identify them. Secondly, despite not receiving any information as to the location of the reader, or the circumstances under which he found the worms, we can confidently identify these creatures as millipedes. In fact, these appear to be the most common, brown millipedes one can find.

Millipedes are part of the family of invertebrates known as ‘arthropods’. Arthropods are characterized by their hard exoskeleton, which is broken up into multiple segments, seen clearer on another image our reader sent in. Each segment has its own set of legs, which adds up to approximately 160 legs. This is what gives them their name, which translates to ‘thousand feet’ in Latin. Usually, their bodies span one inch, and they have cylindrical bodies that are either brown or black in color. Of course, there are a multitude of millipede species, which are of different sizes and colors, but this description matches that of the most common millipede, which we believe is the type displayed in the images sent in by our reader. Additionally, it is important to distinguish between millipedes and centipedes. Centipedes are similar in description, but have legs which come out the sides of their segments, while the legs of a millipede are underneath the body, which often renders them invisible to the naked eye.

Furthermore, these creatures thrive in environments which have high moisture concentrations and which provide shade. For this reason, millipedes tend to hide during the day, and are most prevalent during the night. They are often found outdoors under piles of leaves or rocks, and in cracks in building walls. Because housing units often provide these environments, millipedes tend to bother people at their homes when accidentally wandering in through said cracks to seek cooler habitats and thus, infestations can occur. However, millipedes are not pests. They are neither harmful toward humans, nor toward plants or pets. In fact, millipedes are environmentally beneficial. The diet of the millipede consists of decaying organic matter, which it breaks down and then returns to the soil, much like an earthworm. Thus, if anyone were to find a millipede feeding on their plants, it would only be because that plant was already in decay.

In order for our reader to prevent millipedes from infesting his home (assuming that the photograph was taken at his home), he should ensure that all cracks, in the home or in bug screens, are sealed so as to prevent millipedes, and other creatures for that matter, from entering his home. Furthermore, our reader should make sure to consistently keep his windowsills free of dead leaves and other organic matter as this will help prevent millipedes from being attracted to his home. Even piles of leaves resting against the side of the house should be removed to ensure the same. If our reader wishes to remove the millipedes he has found, he should do so carefully and humanely. Simply brushing them up onto a dustpan and relocating them to a suitable environment should do fine. And our reader needs not be alarmed when the millipedes curl up as they have done in the first image. This is a defense mechanism they utilize when they are disturbed or feel threatened. According to the Extension and Outreach division of Iowa State University, millipedes also curl up when they die, so the act of them curling up when they are disturbed can be seen as them ‘playing dead’.

To conclude, the brown worms our reader found were millipedes. These critters pose no threat, but are beneficial organic decomposers, and should be handled with care. When dealing with infestations of millipedes, we do not recommend pesticides or any such chemicals, as they are both inhumane and ineffective against millipedes; the methods listed above should suffice.

Article Name
C-Shaped Worms Man Found Outside is a Cluster of Millipedes
Description
A reader of ours recently sent in this image of a cluster of brown worms he found outside. The worms appear brown in color, with a segmented body, and many of them are curled up into a 'C' shape.
Author
Worm Researcher Anton
Share the knowledge

This many people searched for this info: 2,928