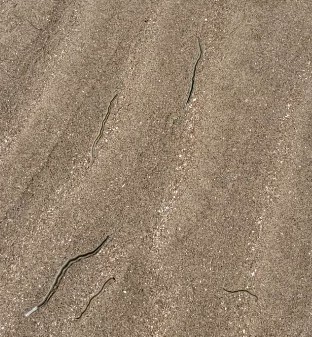 One of our readers recently sent in a video from the beaches of La Paz, Mexico of a cluster of worms he discovered. He states that the worms vary in size, but estimates that the largest of them are “about the length of a toothpick” and about half the diameter of one. 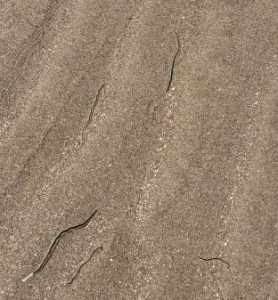 According to our reader, the worms are only out for a few hours during the low tides before they disappear into the sand. He adds that the worms seem to be docile, but if one is picked up and placed in the path of one of the other worms, it immediately reacts. Our reader describes this reaction “almost like a strike”, where the “striking end turns white for just a fraction of a second.” He continues to say that while the worms seem displeased about their displacement, they appear unharmed. We want to thank our reader for not only providing such a clear quality video of them moving and performing their “strike”, but also providing us with such rich description of their behavior, as well as the geographical location they were found.

Furthermore, the purpose of ?—what we will call?— the ‘white strike’, is actually a defense mechanism, courtesy of Charlotte Dudal’s excellent project on green paddle worms for The University of Queensland. The green paddle worm’s epidermis (outer layer of protective skin) secrets a white mucus which further helps protect its skin, but this mucus can also be used as a defense mechanism. This mechanism is activated when the worm feels threatened, either by a predator, or a “sudden environmental change”, says Dudal. This would explain why the worm became defensive when picked up by our reader and placed somewhere else. To view the defense mechanism in action, see the video below.

This mucus should not be harmful to humans, and neither should the worms themselves. However, we cannot promise with absolute certainty that potential allergic reactions to the mucus will not occur, so we recommend anyone who stumbles upon these worms to be cautious, and to treat them respectfully. Additionally, green paddle worms are related to bristleworms in the sense that they are both polychaetes (unsegmented marine worms with bristles). Bristleworms can be very dangerous, stinging with their bristles, which can penetrate and stick in your skin. Whilst green paddle worms are not known to do this, we still advise caution in the case that their bristles may also cause some sort of harm or reaction.

To conclude, the worms that our reader found on the beach in La Paz, Mexico are green paddle worms. These worms are as the reader described, docile in nature. Despite this, we recommend handling these worms with caution and care, or simply not handling them at all, but letting them be.

Article Name
Green Paddle Worms Found on Beach in La Paz, Mexico
Description
One of our readers recently sent in a video from the beaches of La Paz, Mexico of a cluster of worms he discovered. He states that the worms vary in size, but estimates that the largest of them are "about the length of a toothpick" and about half the diameter of one.
Author
Worm Researcher Anton
Share the knowledge