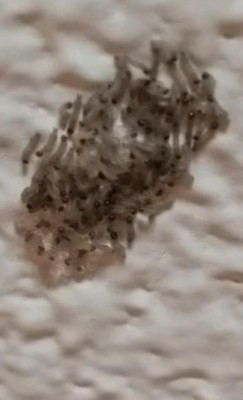 “My wife and I saw something on our ceiling and thought it was a stain until I got closer with a flashlight and realized it was moving,” writes this couple about a cluster of larvae they discovered in their home. From our reader’s description of them, it is clear that the larvae are minuscule in size, and in addition to that the larvae appear to be a gray translucent color with black heads. 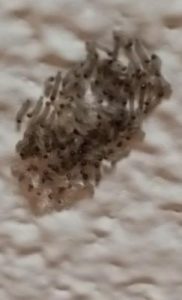 Our readers write to us after having read one of our articles on a patch of American Ermine moth larvae found on a different reader’s ceiling. They say that our image helped them identify the moving mass as American Ermine moth larvae, but they want our confirmation on this identification. They add that a few days prior to finding the larvae, they caught a moth in their house and released it outdoors. “Guess she left us an unwanted present.”

We can confirm that these are indeed American Ermine moth larvae, and the moth found in their home was very likely the mother moth. The adult American Ermine moth is quite distinguishable in its appearance. With its stark white wings, patterned with black polka dots, and a mane of white ‘fur’ near its head, this creature looks like the moth world’s equivalent of Cruella de Vil. If our readers want to confirm if this is what the moth they found looked like, they are welcome to do so in the comments section below. The larvae look like the ones in the photographs our reader sent us, at least when they are newly hatched. Once matured, the larvae are black-to-brown, with long bristles sticking out from every part of their body, making them look furry. The bristles are actually still visible on their newly-hatched counterparts, but they are clearly much shorter and more subtle.

American Ermine moth larvae are not pests; they do not feed on clothing or ‘human foods’, but would rather eat woodland vegetation such as strawberry bushes. They are likewise not harmful to humans in any way, being neither venomous, nor parasitic. Our reader can thus move these larvae outside just like they did with the mother moth. Like many moths, the American Ermine moth is drawn to light, so the mother moth likely flew into our readers’ home through an open door or window, rather than being attracted to something inside. That said, the mother moth could have been attracted to the stable climate conditions of the home, and so thought it a viable place to lay her eggs.

On a final note, we wish to say that these do also resemble newly-hatched fall armyworm larvae (the offspring of another moth that lays its eggs in large clusters), and it did cross our mind that these might be those instead of American Ermine moth larvae. We did eventually settle on the latter as the correct identification, and there are ways one can tell them apart, despite their uncanny resemblance. Firstly, fall armyworms are darker in color, being a darker gray, leaning on black. Secondly, when one looks close enough at newborn American Ermine moth larvae, one should be able to make out their bristles. Lastly, American Ermine moth larvae are typically found alongside several unhatched eggs (such as in the photograph in our past article linked above), and it seems as though some of those are also present in the photographs our reader sent in.

To conclude, the larvae our readers found on their ceiling are indeed American Ermine moth larvae, and we commend our readers for utilizing our website to identify them correctly! As these larvae are not harmful to our readers or their home, they will be glad to know that they really have nothing to worry about. Should they have any more questions, or it turns out that the moth they found was not the mother, they are welcome to write to us in the comments section below.

Article Name
"Yikes!" Say This Couple Upon Discovering Cluster of American Ermine Moth Larvae On Their Ceiling
Description
"My wife and I saw something on our ceiling and thought it was a stain until I got closer with a flashlight and realized it was moving," writes this couple about a cluster of larvae they discovered in their home. From our reader's description of them, it is clear that the larvae are minuscule in size, and in addition to that the larvae appear to be a gray translucent color with black heads.
Author
Worm Researcher Anton
Share the knowledge