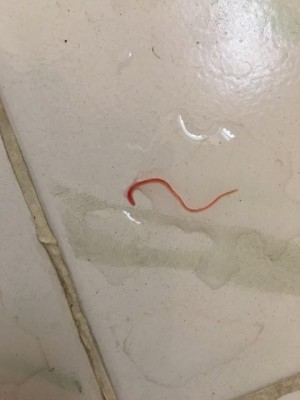 “I am seeking insight into how common it is for fish to encounter earthworms and/or aquatic worms”, states this reader in his submission. “I am aware that fish use a keen sense of smell to find food and are often triggered by movement to prey on organisms. However, earthworms are a very effective bait for a wide variety of fish species, in an equally wide variety of water systems. I am also aware of various types of aquatic worms, but I have never encountered them (even inside a fish’s stomach). Anglers will use “earthworms” such as red worms and nightcrawlers for fresh water fish and for saltwater they will use “sand worms” and “blood worms”. It is my understanding that the salt water baits are roughly a “marine” species”? They frequent sandy beaches along ocean coasts. I would be primarily interested in the freshwater ecology, although the salt water counterpart is also intriguing. It seems the sand and blood worms are also very attractive to a wide variety of fish (salt water fish) as well. Thank you, I love your site.”

To start with, we want to thank our reader for his submission, and we appreciate the love. This is a question/request we have not encountered before, so it will be interesting to get into this. Now, with regard to our reader’s first request, about how common it is for fish to encounter earthworms and/or aquatic worms, it is fairly common. In the case of fresh water fish, it is not uncommon at all for them to encounter earthworms. When there are heavy rains, earthworms tend to rise to the surface, and as such will often get washed into bodies of water, such as lakes and ponds where fish are present. This is one of the reasons why fish respond to earthworms as bait. But more so than this, fish are just not picky eaters. If they see anything small that is wriggling around and which will fit in their mouths, they are likely to try and munch on it, as our reader suggested. That’s why artificial baits will also work on fish.

Now, to answer our reader’s second question about salt water baits being marine species, he is absolutely correct, at least about sand worms and blood worms. Sand worms, otherwise known as lugworms, are indeed marine worms, as are most species of blood worms. The term ‘bloodworm’ actually refers to an entire category of blood-red worms that get their color from the excess amount of hemoglobin they produce, which allows them to sustain for long periods of time in environments with little oxygen, such as water. The reason marine worms are usually used as salt water baits is because marine worms are more likely to already exist in those habitats. Hence, the fish will be familiar with those worms and will want to eat them.

To conclude, this has been a brief look at worms as fish bait. We hope we answered our reader’s questions to a satisfactory degree, and if he has more questions, then he is more than welcome to contact us again. Until then, we wish him the very best!

Article Name
Worms as Fish Bait: A Brief Look
Description
"I am seeking insight into how common it is for fish to encounter earthworms and/or aquatic worms", states this reader in his submission. "I am aware that fish use a keen sense of smell to find food and are often triggered by movement to prey on organisms.
Author
Worm Researcher Anton
Share the knowledge

This many people searched for this info: 109