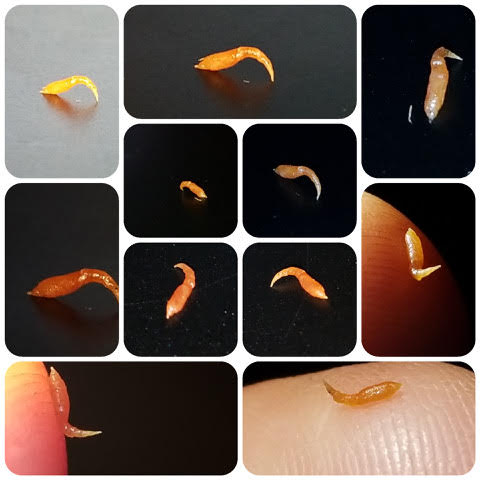 A pointed-tailed worm was found on the upper thigh of this man. After multiple, unsuccessful doctor visits, our reader is “trying to figure out what parasite” he has, and wonders if we can aid him in identifying this creature. 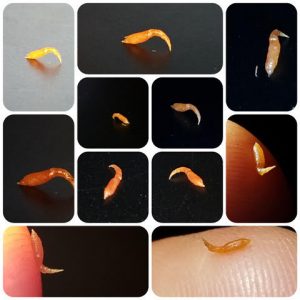 Secondly, whilst we will not be able to say what the worm is, we can say what it is not. In addition to stating that the worm was found on his upper thigh, near his groin, our reader lists his different doctors’ guesses at what the worm might be. His first doctor guessed that the worms were scabies (a parasitic mite that burrows under the skin and feeds on blood), and his second doctor thought they might be demodex (a mite that feeds on the oils of hair follicles). We can confidently say that this worm is none of these options. Mostly for the simple reason that neither of these two mites resemble the worm at all; in fact, they do not really resemble worms at all, each mite having multiple legs. In addition to this, scabies do not leave the body to wander around on the outside, and demodex mites are much smaller than the worm in these photographs. To the naked eye, demodex mites are but small, white specks. While it might make sense that demodex mites were found in the area they were, pubic hair being one of the common places one can get them, it is still unlikely, given the reasons detailed.

Furthermore, our reader’s third doctor ran a stool and blood test for ova parasites, but found nothing. He then advised our reader to consult a shrink. To be frank, we find it rather absurd that this doctor suggested seeing a shrink for a parasite. We are not sure how a psychiatrist could help with worms. It seems that our reader agrees, who joked that he would “need to see a shrink just to cope with the last infectious disease dr’s lack of parasite knowledge.” We think it is great that our reader is able to stay positive and make light of the situation, despite how worrying it must be. As stated previously, we urge our reader to consult another infectious disease specialist, as we believe (and hope) they would be able to provide the aid our reader needs, and has not been getting.

To conclude, it is unclear what this worm is that our reader found on his leg. It is unfortunate that our reader has not been able to get help from the doctors he consulted, but we remain hopeful that he will find someone with the sufficient knowledge to give him an accurate diagnosis and proper treatment.

Article Name
Three Doctors Unable to Identify This Pointed-Tailed Worm
Description
A pointed-tailed worm was found on the upper thigh of this man. After multiple, unsuccessful doctor visits, our reader is "trying to figure out what parasite" he has, and wonders if we can aid him in identifying this creature.
Author
Worm Researcher Anton
Comments: 2 Posted by: All About Worms Categories: Parasite Worms, Worms Generally, Worms in Humans