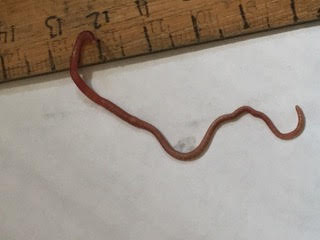 Red-Striped Worm in Toilet is a Tubifex Worm

A long red-striped worm was found by this concerned reader in the South East of the UK. She discovered the worm after she and her children came back from a holiday and used the toilet; she is worried that it may have come from one of them. 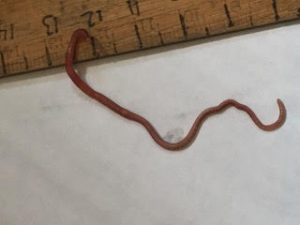 In addition to the excellent pictures, our reader also supplemented us with a great deal of context. She starts her query by stating that she is “extremely anxious and worried”, and so we think it is only appropriate to begin our article by saying there is no need for her to feel this way; this worm is not a parasite. Furthermore, our reader says that the holiday they were on was a week long, and that both of her children and her all used the toilet before the worm was discovered. She has been to a doctor, whom she showed the worm to, and they gave her Mebendazole (a common medication for intestinal parasites) in the case that it was a roundworm. The doctor was not “interested in taking any samples” or “trying to determine what the worm” was. Our reader says she is trying to figure out if the creature is a parasitic worm or a sewage worm, and we are pleased to inform her that it is indeed a sewage worm.

Sewage worms, otherwise known as sludge worms, bloodworms, or more properly, tubifex worms, are marine worms that are actually commonly found in people’s toilets. Tubifex worms are part of the phylum annelida, meaning they are segmented worms, related to earthworms, leeches and other species of worm that pertain to this taxonomic classification. These critters thrive in stagnant water, where they feed off organic detritus and waste materials. A fun, but disturbing fact is that tubifex worms assemble in groups in pipe systems where they feed together, and can sometimes be discovered together with their group in a writhing mass of worms. Our reader is welcome to check out our previous article on tubifex worms for a photograph of this phenomenon, and for any other information on these worms. 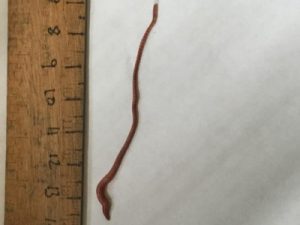 In regards to what our reader should do to deal with the presence of the tubifex worm, we recommend simply moving the worm outside to a puddle or pond where it can feed on organic matter in peace. When it comes to preventing future discoveries of tubifex worms, consistent housekeeping should do the trick. Cleaning one’s toilet often is key to the prevention of many types of worms that can come swimming up in search of waste materials to eat.

To conclude, the red worm our reader found in her toilet is a tubifex worm. This worm is not parasitic, and so it did not come from either her or her children, and she needs not worry for their safety. That said, we are not medical professionals, and so if our reader still has any concerns, she should consult a medical professional again.

Article Name
Red-Striped Worm in Toilet is a Tubifex Worm
Description
A long red-striped worm was found by this concerned reader in the South East of the UK. She discovered the worm after she and her children came back from a holiday and used the toilet; she is worried that it may have come from one of them.
Author
Worm Researcher Anton
Comments: 0 Posted by: All About Worms Categories: Marine Worms, Segmented Worms Annelida, Worms Found in the House