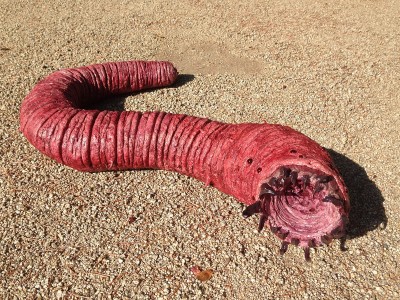 We have written articles previously on the myth that is the Mongolian Death Worm. This article will provide updates on the supposed existence of the Death Worm, and inform any new readers of this strange and terrifying creature. 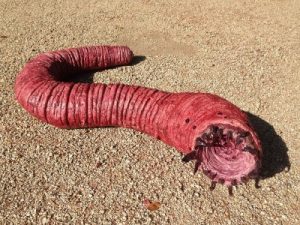 The Mongolian Death Worm is a creature from legend, said to inhabit the wastelands of the Gobi desert, living underground for the better part of a year. Despite sightings of the Death Worm being limited to hearsay, many in Mongolia are adamant about its existence, and even speaking its name aloud is considered taboo. It has been described as being red in color, with a gaping mouth at one end that is as big as the girth of its body and is filled with rows of inward-pointing teeth. Speaking of its body, the Mongolian Death Worm is, of course, giant. Its native name, ‘Olgoi-Khorkhoi’ translates to intestine worm, not only because of its appearance, but also because it is supposed to be the size of a human’s large intestines. In case any of our readers do not know, the large human intestine is five feet long.

In 2018, Pat Spain from National Geographic investigated sightings of the Mongolian Death Worm in the Southern regions of the Gobi desert, to see if he could unearth anything about the mythical creature (pun intended). Although he found unusually high moisture levels in the soil of the desert, thus begging the question of whether or not a worm-like creature could logistically even survive in the desert, he was unable to actually spot a Death Worm. Spain also interviewed an eye-witness, but since the elderly lady’s story was from her childhood, time could easily have tainted her memory. Furthermore, since Mongolian legend has its people so resolutely convinced of the Death Worms existence, any eye witnesses who see some other species of snake or worm may mistake it for the Death Worm out of fear.

To conclude, nothing of real value has been discovered in the past eleven years since we last wrote about the Mongolian Death Worm. Besides new ‘facts’ about the worms being added to the creature’s myth, and some investigations done for the sake of television entertainment, there is still nothing that proves that such an absurdly unrealistic creature exists. And as the legend expands, more of the ‘facts’ that come out about the worm contradict each other and further surrenders any truth the legend might have had to it.

Article Name
The Mongolian Death Worm: Fact or Fiction?
Description
We have written articles previously on the myth that is the Mongolian Death Worm. This article will provide updates on the supposed existence of the Death Worm, and inform any new readers of this strange and terrifying creature.
Author
Worm Researcher Anton
Share the knowledge