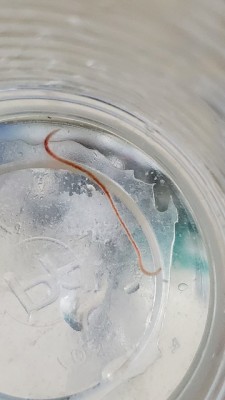 A red worm was found in the toilet by one of our readers one night. This red worm appears to have sheer skin, is quite long and has a thin body, and our reader asks that we identify it for them. 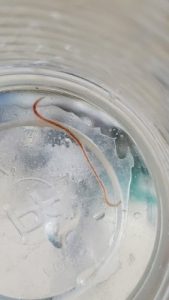 From the video our reader sent us (from which the screenshot is taken), we can see the worm wriggling about in a clear container of sorts, and it is apparent that it does not have legs, but rather moves more like an earthworm would. Additionally, our reader states that the day they found it, they “did not pass any faeces”, so they doubt that the worm came from them. We would agree with this notion that the worm did not come from our reader. It simply does not resemble any known, common intestinal parasite. It more resembles a tubificid worm than anything else. However, given its size, this could be doubtful. In any case, we would suppose that this is some type of oligochaete worm.

Oligochaetes are a subclass of worms that belong to the phylum annelida. This means that these are freshwater marine worms which are segmented; worms that are included in this phylum are earthworms, leeches and tubificids. These critters can potentially be found in pretty much all freshwater habitats, but our reader has nothing to fear as they are completely harmless toward humans. On that note, it is debatable whether or not leeches are oligochaetes. While they are related, most sources would confer that they are not technically oligochaetes, and thus that all species that do fall under the classification of an oligochaete are indeed harmless toward humans and other mammals. Many species of oligochaetes tend to be red due to an excess amount of hemoglobin being produced (the molecule that humans also share which carries oxygen in the blood cell) in order for them to be able to sustain in low-oxygen conditions.

Moreover, oligochaetes feed on the sediment level of the bodies of water they inhabit, and specifically on whatever organic matter they can find, and that is small enough for them to eat. Because of their diet consisting of such organic matter, certain species of oligochaetes (such as tubificids) have been known to swim up people’s toilets. This can be a sign that the specific toilet they are discovered in is not cleaned regularly and/or properly enough. As a result, organic matter starts to build up and decompose, thus attracting those creatures that feed on decomposing organic matter. If our reader thinks this might be the case, then we recommend trying to stick to a consistent bathroom cleaning schedule. Toilets should not only be cleaned with the toilet cleaner that goes around the bowl, but also with bleach. Alternatively, the presence of oligochaetes could also indicate that there is a build up of organic matter somewhere else in the pipe system. In that case, one would need to hire a plumber to get that sorted out.

In conclusion, the red worm that our reader found in their toilet is most likely an oligochaete of some sort. Normally, we would suggest that this a tubificid, and that may still be a possibility, but its length has us questioning that. Regardless of its specific species, the treatment and indicator value of any oligochaete is the same.

Article Name
Bright Red Worm Found in Toilet is an Oligochaete
Description
A red worm was found in the toilet by one of our readers one night. This red worm appears to have sheer skin, is quite long and has a thin body, and our reader asks that we identify it for them.
Author
Worm Researcher Anton
Share the knowledge

This many people searched for this info: 1,610