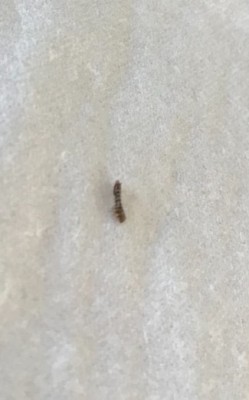 Two live, small, brown worm-like creatures were found crawling on the blanket of this reader. She thinks they may be carpet beetle larvae and asks for our thoughts on the matter. 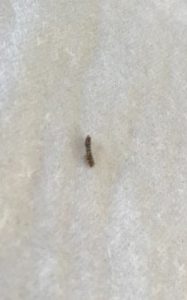 In addition to some photographs (which we are very thankful for), our reader stated that the first larva was found dead upon lifting up her bed sheet, and that the second one was found while cleaning out the dryer lint, and that one was larger, with more distinct features. In the second photo, we actually get a side-by-side comparison of the two organisms. Though our reader does not suggest that the two are different species, which is possible, organisms of the same species can be different sizes depending on the stage of development they are at, how much food they have consumed, and confounding genetic factors.

Carpet beetle larvae are common pests of the household. Their adult beetle forms do not actually contribute that much to what makes these creatures so irritating to have in one’s home. The adult beetle can feed on certain foods in the house, such as grains and cereals, but it is the larvae that do the most damage. As the name suggests, carpet beetle larvae feed on carpets, but really so much more. In fact, carpet beetle larvae will eat through any animal-based material they see fit. This includes upholstery, clothing, pelts, and bed spreads. They can cause significant damage to one’s textiles and can go unnoticed for a long time as they hide in small, dark, cramped spaces to lay their eggs, and burrow their way into whatever material they are feeding on, hiding between the folds of a sweater or the fibers of a carpet. 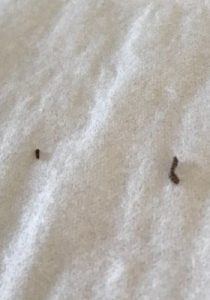 To get rid of and prevent carpet beetle larvae, one must employ a mix of consistent vacuuming of the home and laundering of the appropriate materials, as well as storing one’s unused garments appropriately in vacuum-sealed bags or cold vaults (if that is an option). Additionally, ensuring that all of the cracks in one’s walls and flooring are sealed where possible and that one’s window screens are in prime condition is important to keeping out just about any kind of creature. Carpet beetles can fly, so they could really come from just about anywhere!

In conclusion, the organisms our reader found on her blanket and in her dryer are carpet beetle larvae. These little guys can be quite annoying to try to get rid of, and we recommend that she keeps a lookout for more of these larvae, as it is possible that she is dealing with an infestation. Regardless, we urge her to employ the methods of dealing with and preventing carpet beetle infestations immediately, so as to get the upper hand on this potential infestation before it gets worse. Best of luck to her!

Article Name
Striped, Brown, Worm-like Creature Found in Dryer Lint is a Carpet Beetle Larva
Description
Two live, small, brown worm-like creatures were found crawling on the blanket of this reader. She thinks they may be carpet beetle larvae and asks for our thoughts on the matter.
Author
Worm Researcher Anton
Share the knowledge

This many people searched for this info: 2,715