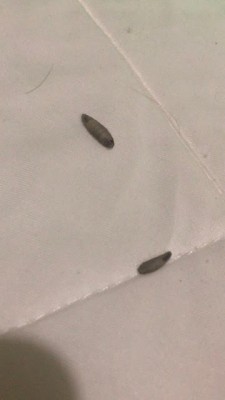 Two worms of a matte gray appearance have been discovered in the bed of this reader, who wonders what type of worms they are and if she needs to change her mattress. As she has a baby, she states that she is being “extra careful”, and hopes that she does not have to worry about them. 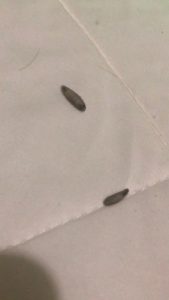 To begin with, we will address the fact that these creatures, while being worm-like, are probably not actually worms in the sense that an earthworm or a pot worm is a worm. To us, these looks more like larvae. This is due to their bodies’ width to length ratio and ovate shape, as well as the location in which they were discovered. Most species of worms, which are strictly ‘worms’, are drawn to moisture and decomposing organic matter, while the term ‘larva’ applies to thousands upon thousands of species of various insects, which prefer a variety of habitats and diets.

That being said, we are unfortunately quite puzzled when it comes to figuring out the identity of these larvae. Their appearance is quite simple, yet does not match any larvae that are commonly found within the household, mostly due to the fact that their appearance, in actual fact, is too simple. Although these do resemble some species of larvae, in terms of the coloration and shape, they lack in many of the physical characteristics that other larvae possess. One would expect more clear segmentation when looking for an black soldier fly (BSF) larva, and more multicolored markings when looking for a fall armyworm, for example. Regardless, we will outline some characteristics of the larvae that these creatures do resemble, in the hopes that this article can still prove somewhat informative for our reader.

Firstly, let’s take the BSF larva. These creatures vary in color from dark brown to black to gray, grow up to one inch in length, and have an interesting shape to their bodies. Usually, while one end of the body is broad and squared off, the other end narrows down to a tip. That is not to say that there are not BSF larvae where this particular shape is less defined, and so that is not what rules this out as a possibility. It is not even their location of discovery that disqualifies them, even though BSF larvae are usually found near waste or compost bins where they feed on organic matter. BSF larvae have been found around in other areas of the home before, and this is true for any larva who is found out of place; sometimes they just end up there for one reason or another. What has us questioning whether or not the creatures our reader found are BSF larvae is the lack of clear segmentation of the body, as well as the presumable texture of the skin. Whilst BSF larva have very distinct lines segmenting their hard bodies, these creatures’ skin looks as if it would be smooth to the touch, and the lines are quite faint. Of course, perhaps this is due to the camera quality or the stage of development these creatures are at. One cannot say for certain.

Secondly, we can take into account the likelihood of these organisms being cutworms or armyworms, both of which are caterpillar plant pests. Although cutworms (which is an umbrella term for various species of moth caterpillars with similar behavior) live in the soil, where they feed on the stems of various plants and cut them down (pun not intended), and armyworms travel in groups (a group of caterpillars being an army), we still would not rule out the possibility that one could find one of these caterpillars in their room. Perhaps a cutworm crawled its way through a window to get to that houseplant on the windowsill? Or maybe a couple of armyworms went rogue and left the pack to invade our reader’s home? Or maybe they just went seeking shelter? One cannot exactly predict the behavior of larvae that are found outside of their habitat. However, although most species of cutworms have a black head like the organisms in our reader’s photographs, they tend to have other markings too. Likewise, armyworms tend to have gray or brown spots and whitish/yellow stripes along their bodies, and these organisms lack any such distinction. For those reasons, we are skeptical that these creatures are any of these two options. On the other hand, since there are so many species of cutworms of differing appearances, this seems the most likely out of any of the options we have provided.

What we should stress is that although we are not sure of the identity of these organisms, they are clearly larvae of some sort, and do not resemble any worms or parasitic organisms that would be harmful to our reader or her baby. Lastly, if our reader were to find any more of these larvae, we recommend she keeps a couple of them in containers with air holes and some food to see what they grow into. As they mature, they will likely develop more distinct features, and it will be easier to identify them. For example, if they were to grow prolegs — specifically six of them — then it would be confirmed that they are the larvae of an insect. If our reader does apply this method, we encourage her to send more pictures so we can have a second go at identifying these organisms.

To conclude, out of all the options, these are most likely cutworms, though we cannot say for sure. If any of our other readers have any clues as to the identity of these critters, they are free to voice their ideas in the comments section below. Otherwise, we wish the best of luck to our reader and hope that this is not an infestation, but merely two larvae who happened to wander in through an open window or door.

Article Name
Mysterious Gray Larvae on Bed May Be Cutworms
Description
Two worms of a matte gray appearance have been discovered in the bed of this reader, who wonders what type of worms they are and if she needs to change her mattress. As she has a baby, she states that she is being "extra careful", and hopes that she does not have to worry about them.
Author
Worm Researcher Anton
Share the knowledge