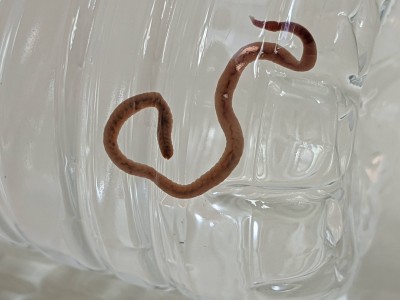 “I found this live worm in the toilet,” says this reader, who asks if we can identify the worm which he trapped in a bottle to capture this amazing photograph for us. The worm is a translucent, beigy-pink color, has dark vein-looking marks along its body, and has one end that appears to be more pointed than the other. 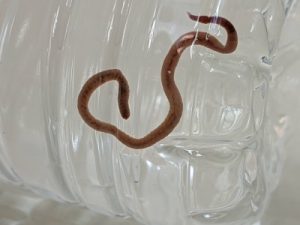 Our reader begins his submission by congratulating us on our website, saying that he has found very useful information on it, and for this we thank him. He continues on to say that the worm pictured above was found in his toilet, alive right before he was about to use the restroom. The toilet was last used 20 hours prior to finding the worm. According to our reader, the worm spans 6-7cm (roughly 2.4-2.8-inches) in length, and is 1-2mm (0.04-0.08-inches) in girth. He asks us to remember that the worm is photographed inside a plastic bottle, and so its image is slightly distorted.

Now, our process of trying to find out what this worm-like creature is has left us going around in circles. The shape and markings of this worm are quite unique, and unlike anything we have seen before. Only its size and coloration is akin to earthworms and glycera bloodworms, and we considered these options. Ultimately we disregarded those possibilities because of this worm’s lack of a clitellum (in the case of the earthworm) and lack of bristles (in the case of the glycera bloodworm). So, we started at square one and analyzed the photo our reader sent. But each time we looked at the worm and thought, “oh, it might be this!”, and then came back to the photo, we would notice another detail which threw us off all over again.

The unique characteristic of this worm that we first noticed was its dark markings, which to us look like they are underneath the skin, meaning they might be veins. This suggests that the skin of the worm is partially translucent. Again, this is similar to earthworms and glycera worms. Then we noticed its aforementioned pointed tail. Not only does it appear pointed, but this ‘tail’ juts out horizontally before forming a triangle, similar to that of a rattlesnake’s tail. This brings us to our next observation. Only upon close inspection, if one zooms really far in on the photo, can one see that the skin of the worm is not entirely smooth, but patterned with what we could only describe as scales. It then hit us that this might indeed be a snake and not a worm. 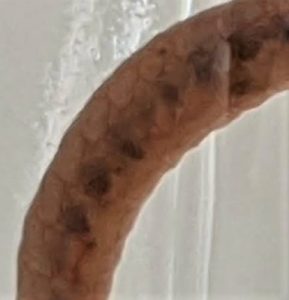 There are, in fact, species of snakes that really are this tiny, such as the brahminy blind snake, which we have covered before. And although brahminy blind snakes can be this size, we do not think that is what our reader found, purely because the markings and triangular tail do not match up with the brahminy blind snake. Unfortunately, although there are plenty of species of smaller snakes, there is not one we could find that was similar to the creature our reader found. We also cannot say for sure if it is a snake, but the signs do point toward this conclusion.

Regardless if this is a snake or a worm, we advise caution if and when handling this creature, as we do not know if it is venomous, prone to bite, or if it can cause allergic reactions on skin-to-skin contact. We doubt it is a parasite, as it is a little too big to be anything but a tapeworm if it were a parasite, and it is clearly not a tapeworm. Our guess is that it, like many other kinds of creatures have done in the past, ended up in our reader’s toilet accidentally. Perhaps our reader has a cracked sewage pipe that needs mending? It is hard to know exactly where these creatures come from. We recommend that our reader take it outside in the water bottle he has already got it trapped in and release it somewhere outside (perhaps by a spring or pond, given the possibility that, since it came up his toilet, it might be aquatic). 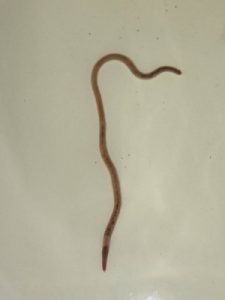 Furthermore, we urge our reader to keep a look out for more of this creature, both in his bathroom, but also in the rest of his house. As we are not sure what it is, we cannot say for certain if his home is risk-free of an infestation. What our reader could also do is bring the creature to his local county extension office (if possible) and get a second opinion on its identity.

To conclude, we are not sure what our reader found in his toilet, but given its physical characteristics, we would say it might very well be some species of small snake, or a baby snake for that matter. If he does find more of these, or unearths any information on the creature, we welcome him to contact us again. Likewise, if any of our other readers have any clue as to what this is, they are free to voice their suggestions in the comments section below!

Article Name
Snake-like Creature Found in This Man's Toilet
Description
"I found this live worm in the toilet," says this reader, who asks if we can identify the worm which he trapped in a bottle to capture this amazing photograph for us. The worm is a translucent, beigy-pink color, has dark vein-looking marks along its body, and has one end that appears to be more pointed than the other.
Author
Worm Researcher Anton
Share the knowledge

This many people searched for this info: 1,540