A long, glossy worm was found by this reader’s five-year old daughter in their restroom. Our reader wonders if we can tell them what type of worm it is that their daughter found. 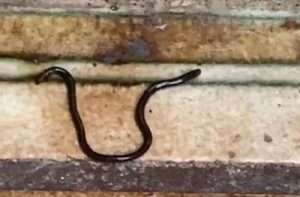 Courtesy of our reader, this excellent photograph tells us quite a lot about the creature found. Its glossy, smooth-textured skin tells us that it is not a segmented worm, its lack of legs rules out the possibility that it is a millipede, and the way it is lying demonstrates its flexibility. So, in regards to what this worm is, it turns out it is not a worm at all, but a snake. Although the image does not provide anything to which we can compare the size of this creature, we can understand that one may be thinking, “no way could someone have found a snake in their bathroom and thought it was a worm.” And yet, this snake is more often than not mistaken for a worm, for it is incredibly tiny! In fact, it is the smallest species of snake in the world.

Otherwise known as the flower pot snake, the brahminy blind snake is a non-venonous snake that has had many names throughout history. Its currently accepted scientific name is Indotyphlops braminus. When fully matured, these snakes can grow up to 6.5-inches/16.5cm, according to Florida Museum’s website. Their coloration varies between shades of gray (this black color being in fact more of a “charcoal gray”) and even purple. This adorable critter is native to southeast Asia, but has become “the most widespread snake species in the world,” and can be found in urban, as well as agricultural habitats.

Brahminy blind snakes prefer to reside in soil, leaflitter, or garden mulch where they feed off the eggs, larvae, and pupae of insects such as termites and ants. The Florida Museum speculated that it migrated to Florida by means of imported plants, and perhaps that is how it migrated to so many different parts of the world as well. In fact, it is the tendency to find these in one’s plants that has given it the nickname, ‘flower pot snake.’ Now, why it would be found in someone’s bathroom is quite the mystery. It is possible that it came up through the drains if there were insects in there that it wanted to eat. An alternative explanation is that it was residing in the soil of some house plant and then decided to go and explore our reader’s home. Either way, brahminy blind snakes are completely harmless, and infestations of them are not likely, so moving it outside should suffice in dealing with the issue.

Finally, one fun fact we thought we would point out about the brahminy blind snake is its asexuality. What is incredible about brahminy blind snakes, is that they are all female. Sperm is not required from a male counterpart for cell division to occur in the snake’s egg, and thus “up to eight genetically identical female offspring are produced” (Florida Museum).

To conclude, the worm our reader’s daughter found in their bathroom was actually a brahminy blind snake! This adorable, harmless critter needs not be feared, despite snakes often having negative connotations attached to them, and moving it outside will be enough to deal with the issue at hand. When handling the snake, our reader can look out for a little tongue sticking out, as they tend do display this behavior when picked up.

Article Name
Glossy Worm Found in Bathroom is Actually a Brahminy Blind Snake
Description
A long, glossy worm was found by this reader's five-year old daughter in their restroom. Our reader wonders if we can tell them what type of worm it is that their daughter found.
Author
Worm Researcher Anton
Share the knowledge