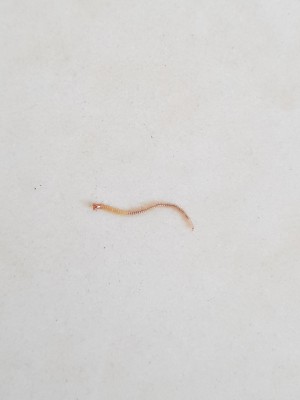 A red, legless worm was found on the tile where this reader’s neighbor’s dog was sitting outside. According to our reader in South Africa, the worms are 2-4cm long, and have two “hooks” coming from their heads. 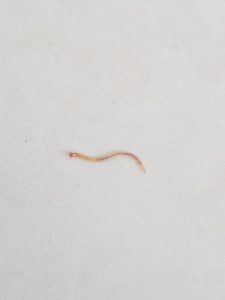 Our reader elaborates by saying that her neighbor’s dog is a six year-old, three-legged Jack Russell who likes to visit her from time to time. The dog was dewormed using Triworm D a month prior to our reader sending in her query. She is an outdoor dog, and spends time in a yard where there are “wild birds and ticks” among other creatures. It seems to be implied that our reader is worried this dog has been infested with some sort of parasitic worm. We recommend that our reader discusses this with her neighbor who owns the dog so that they can take the dog to a vet immediately to have it checked out. However, as our reader does not explicitly express any health concerns for the dog, we cannot assume that this situation is medical in nature.

In the case that it is a garden worm, it would be difficult to identity it, given how far away the video is taken. On one hand, if we were to base our identification from what we can see, and without a size comparison, we would presume that this is an earthworm, given its color and way of moving. On the other hand, our reader did mention that the worm had “hooks” coming from its head. Given this description, we would assume the hooks to be antennae, and argue that this was a house centipede. House centipedes tend to be minuscule in size, transparently red, with dozens of legs and a pair of antennae sprouting from their heads. Upon sending a follow up to her first submission, our reader provided a much sharper image of the worm (as seen at the beginning of the article). In this image, we see that it does sprout dozens of, albeit tiny, legs from the side of its body. It could thus be concluded that this is some type of centipede.

On the other hand, this does not resemble the common house centipede, because if it did, its legs would be much longer and its coloration more consistent. In this new image, we see a creature who has a brilliant rose-gold head, which leads to a transparent-yellow segmented of its body before turning into the reddish-brown color our reader described, and then finally ending in a completely colorless tail. We have never seen a centipede like this before. Although centipedes are not parasitic, and will not have come from the neighbor’s dog, they do have venom which they use to kill their prey. That being said, a centipede of this size will do no harm to the neighbor’s dog, and hence our reader needs not worry.

In conclusion, this worm is likely some species of centipede. Despite us not being sure as to its exact species, it should pose no threat to the dog given its size. We would nonetheless recommend that our reader tells her neighbor about the centipede, so that they can make an informed decision about the dog’s health and if they would still like to take her to the vet.

Article Name
Red Worm with Hooks Found Near Dog
Description
A red, legless worm was found on the tile where this reader's neighbor's dog was sitting outside. According to our reader in South Africa, the worms are 2-4cm long, and have two "hooks" coming from their heads.
Author
Worm Researcher Anton
Comments: 0 Posted by: All About Worms Categories: Centipedes and Millipedes, Garden Worms, Parasite Worms