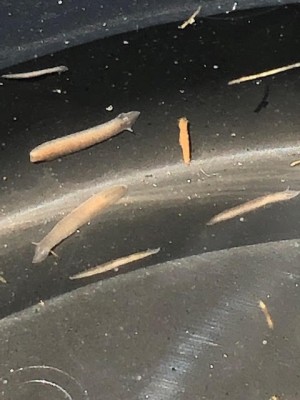 Several worms of different shapes and sizes were pulled out from a water feature in San Diego by this reader who is having trouble identifying them. The worms appear to be clear and tan in color, long in length, but flat in girth. It is difficult to tell from the image if they are textured, or smooth/slimy, but given their transparency, we would place more bets on these worms being slimy to the touch. 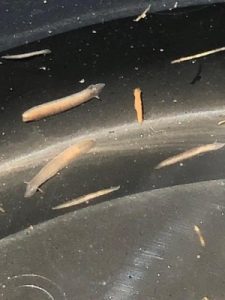 According to our reader, the small water feature where she found these worms is home to fish and duckweed, and she is wondering how worried she needs to be about these worms possibly being a threat to those organisms that already reside there. The worms our reader found are flatworms, specifically planarians, of the class Turbellaria. What gives this worm away is the ‘flatness’ of their body (hence the name flatworm), and the type of flatworm is made clear by the shape and characteristics of the worm’s head. Planarians have a distinctly shaped head that makes the worm resemble a hammerhead worm. But what really sets them apart from any other worm are the two, rather ‘cartoonish’-looking set of ‘eyes’ on the head, which one can make out upon zooming in on the photo (see below). 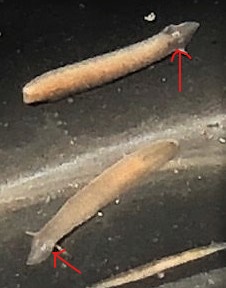 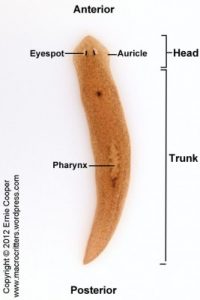 There is so much to be said about flatworms, including the structure of their layered body, their multi-functional excretory system, and their hermaphroditism, but perhaps that is better left for a future article where that information is more relevant. Yet, in this case, there is one more aspect of planarians worth knowing. Although we rarely advise killing any worm that anyone finds, this one in particular would be fruitless to try and kill. This is because planarians have extraordinary regenerative abilities. According to this article from Science.Jrank.org, if a planarian is cut in half, the bottom part will regrow a head, and the top part will regrow a tail. “If cut into thirds, the middle third will regrow a head and tail and the other two sections will regenerate as described.” This is nothing less than a superpower if you ask us. Imagine if humans could regenerate cells in the same way!

In conclusion, the worms our reader found are planarian flatworms, which can be harmful to aquatic life such as marine worms and protozoans, but are not harmful toward humans. We would guess that the smaller worms are simply younger flatworms of the same species, but if they prove to be something else, our reader should feel free to reach out to us again!

Article Name
Planarian Flatworms Found in San Diego Water Feature
Description
Several worms of different shapes and sizes were pulled out from a water feature in San Diego by this reader who is having trouble identifying them. The worms appear to be clear and tan in color, long in length, but flat in girth. It is difficult to tell from the image if they are textured, or smooth/slimy, but given their transparency, we would place more bets on these worms being slimy to the touch.
Author
Worm Researcher Anton
Share the knowledge