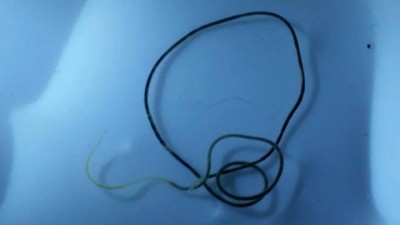 Horsehair worms are one of the most common parasites found in nature, and also one of the most misunderstood. Between the myths that surround them, as well as the vast claims that many make about them, this article intends to clear up any of the misinformation about horsehair worms, particularly their relationship to humans.

To start with, horsehair worms (Nematomorpha) are parasites of invertebrates: mostly insects, though they have been known to take crustaceans as hosts as well. When they are not inside a host though, they prefer aquatic environments. In fact, the eggs of the horsehair worms are laid in bodies of water. And it is in this body of water that the egg hatches, releasing a microscopic larva that will then eventually be consumed by an insect. The catch is that the larva is covered by a cyst, thus protecting them from dying upon consumption. Once consumed, the cyst dissolves and the larva is free to burrow into the stomach of the insect and begin maturation.

Now, besides the myth surrounding their name, that horsehair worms actually develop in the manes of horses and fall down when the horses feed, there is a lot of misinformation regarding the parasitization of humans. We have received a lot of feedback on our articles about horsehair worms, in which we state that horsehair worms do not infect humans, stating that we should correct this, as there have been cases of humans becoming infected by horsehair worms.

To this we want to first say that we appreciate any and all feedback that our readers provide us, and we are more than happy to clear up this once and for all. Secondly, while we maintain the stance that horsehair worms do not purposely infect humans, we agree that they can indeed end up in humans, and we have research to back that up.

The University of California’s Statewide Integrated Pest Management Program has a “page on horsehair worms” in which they explain that “if humans ingest the worms, they may encounter some mild discomfort of the intestinal tract, but infection never occurs.” That is to say, that horsehair worms only end up in humans through consumption of an already-infected host (an insect or crustacean), but they do not seek out humans as hosts.

Likewise, the National Center for Biotechnology Information has published an article titled “‘Two Human Cases Infected by the Horsehair Worm’“, in which they discuss “records of human accidental parasitism” of horsehair worms. They deem these cases “uncommon”. “As for the invasion route, the present human cases may have accidentally swallowed insects, such as a cricket or a beetle which is an intermediate host.”

One example of human ‘infection’ that the article discusses is the case of six people in Japan that accidentally ingested horsehair worms. Other than discomfort, they experienced no symptoms. Eventually, they expelled the worms through vomit or faecal matter. It is important to note that the vomiting and defecation were not symptoms caused by the horsehair worms burrowing in the gut of the humans as they would with an insect. Those that vomited had this reaction because the worms got stuck in their throat upon bursting out of the infected insect host. Those that excreted the worms did so because the worms only came out of the infected insect host after consumption, thus naturally ending up in the intestinal tract.

To conclude, this has been a brief, but necessary, clarification of the effects that horsehair worms can have on humans, and the extent to which they can really affect and infect us. We hope this clears things up for people, and we welcome any questions in the comments section below!

Article Name
Horsehair Worms in People (Nematomorpha Infestation in Humans) Inbox ALL ABOUT WORMS
Description
Horsehair worms are one of the most common parasites found in nature, and also one of the most misunderstood. Between the myths that surround them, as well as the vast claims that many make about them, this article intends to clear up any of the misinformation about horsehair worms, particularly their relationship to humans.
Author
Worm Researcher Anton
Share the knowledge

9 thoughts on “Horsehair Worms in People (Nematomorpha Infestation in Humans)”