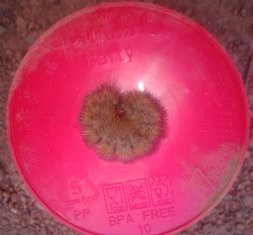 We received a question from a reader earlier today about a fuzzy, brown caterpillar that her daughter found in the yard. She actually referred to the brown and fuzzy creature as a “worm,” but we are virtually certain she found a caterpillar, so we’ll simply use “caterpillar” in place of the reader’s “worm” as we move forward. The reader was first of all wondering what the brown and fuzzy caterpillar is, and she also wanted to know if it is dangerous or harmful in any way. Thus, we have a two-part question to address: what kind of caterpillars are fuzzy and brown, and are these caterpillars dangerous?

The caterpillar is, as described, brown and fuzzy, but that is about all we know, as the picture is the only piece of information we are working with. To be sure, a picture is always extremely helpful, but it is not as if we can look at any given caterpillar and immediately identify it. There are, as we never fail to point out, tens of thousands of different caterpillars in the world, so it is nice to limit the range of options with as much information as possible, like where (geographically speaking) the caterpillar was found. Just the same, we have a few ideas we can offer.

We’ll conclude by saying that in general caterpillars aren’t especially dangerous, but they should be handled with caution, and we wouldn’t recommend that our reader or her daughter pick up any caterpillars just to be safe. Several caterpillars, including Wooly Bear caterpillars, have mildly poisonous hairs that when touched can cause skin irritation or rashes. Thus, you would want to be especially careful around any caterpillar whose body is covered in hair, like the one our reader found, as these hairs could definitely cause some pain and discomfort if they come in contact with your skin. So, we don’t know exactly what caterpillar our reader found, but we can advise her to be careful with it. It very likely won’t cause any serious reaction if touched, and it may cause no reaction at all, but it’s always better to exercise caution and let sleeping dogs lie, as it were.

Article Name
Fuzzy, Brown Caterpillars
Description
We received a question from a reader earlier today about a fuzzy, brown caterpillar that her daughter found in the yard.
Author
All About Worms
Share the knowledge