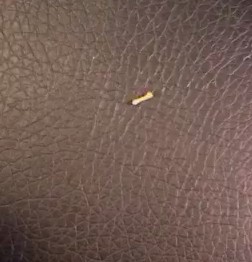 Small, white worm-like creatures were found by this reader in his Washington home. The worms were found next to his dog, who was lying on a chair, and the worms moved by “contracting and stretching its body.”

Unfortunately, it is difficult to pick out the finer details of the worm in question from the pictures and video provided. Upon zooming in on the photo above, it almost looks as if the worm has bristles, but then the first creature that would come into mind is the carpet beetle larva. However, carpet beetle larvae have legs, and thus do not contract their bodies to move forward, but obviously walk on their legs. It does seem that this worm is likely a larva of some sort, though because there are countless larvae that are white and legless, it will be virtually impossible for us to confidently provide the exact identification of this worm that our reader found.
Unidentified White Larva

What we can do is give some suggestions as to what this larva could be, keeping in mind the most common white larvae that are found in homes, as well as list some of their key characteristics. Then our reader might be able to narrow down the suspects and find out what he might have to do, if anything, to control the populations of these larvae. Alternatively, our reader can just send us another query, either with more photos, or a guess as to what the larva might be, and we can provide more specific information. Another method our reader could apply is putting the larva in a container with some food and air holes and wait for it to mature before sending more pictures to us. That way, there is a better likelihood our reader will be able to catch a good picture of it, as it will likely be bigger, and the larva will have more defining characteristics. Nevertheless, here is a crash-course on some common white larvae found in the home:

Webbing clothes moth larvae: these larvae eat animal-based fabrics, and will often be found in between the folds of clothes, in carpet, or on upholstered furniture. Sometimes they leave patches of webbing behind.

Indianmeal moth larvae: also known as the pantry moth, these larvae are often found in the kitchen, where they feed on grains, dog food, cereals and more.

Fly larvae: also found in the kitchen, these larvae are commonly referred to as maggots, and congregate around or in food compost. They are bred and hatched very quickly.

Flea larvae: usually flea larvae are transparent, though against certain backgrounds they could appear white. They are often found on beds, carpets and other places that a pet usually sits, assuming the fleas are feeding on the given pet. If one looks closely enough, one can sometimes make out a strand of black through their sheer skin, which is their insides.

To conclude, we are not able to confidently identify the white larva our reader found, but we hope that the methods – as well as the mini-identifications of various white larvae – above help our reader in solving the problem of what this mystery bug is.

Article Name
How to Identify the Species of a Generic, White Larva
Description
Small, white worm-like creatures were found by this reader in his Washington home. The worms were found next to his dog, who was lying on a chair, and the worms moved by "contracting and stretching its body."
Author
Worm Researcher Anton
Share the knowledge

1 thought on “How to Identify the Species of a Generic, White Larva”