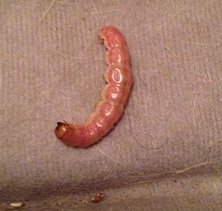 We received a question from a reader a couple of days ago on the All About Worms Facebook page about a pink worm in her bedroom on the carpet. (It’s actually more like a pink, brown, and tan worm, or perhaps a pinkish, brownish, tannish worm – it’s hard to define the worm’s color. See the picture below.) In addition to finding the worm in her bedroom on the carpet, she also found one in her living room on the laminate floor. So, the worms aren’t limited to one part of the house, and she evidently isn’t finding them in particular places (like under furniture, in a pantry, and so on). The reader happens to have two dogs, but she doesn’t think they are related to the presence of the pink worms, or in any case she doesn’t think the worms came from the dogs. Having found no information about the creature, she turned to us to ask what this pink worm in her bedroom and living room might be.

First, here is the image the reader sent in:

The reader submitted another photo of the creature next to a ruler, which showed that it is about an inch long, but the image wasn’t as clear, so we decided to only include the photo above.

Although this is a clear image, it actually conceals some of the most crucial parts of the creature’s body, namely, its legs, which can be very helpful to see when identifying larva. (Yes, we have been using the word “worm” so far, but we did this only to keep with common usage. Our reader almost certainly found some sort of insect larva, which aren’t technically worms.) It appears that the larva pictured above has segmented legs on its thorax – the body part right below the head – and it doesn’t appear to have prolegs, fleshly stubs that help caterpillars (the larval form of moths and butterflies) and sawfly larvae move. Thus, we can be somewhat confident she isn’t finding caterpillars or sawfly larvae (but not that confident because, again, the picture doesn’t really show us the underside of the creature). After this, though, it becomes a lot more unclear.

Everything we have said so far is consistent with carpet beetle larvae, one of the creatures we write about most frequently because readers commonly find them in their homes. The circumstances under which our reader found the larvae is also consistent with carpet beetle larvae, which feed on various non-synthetic materials (like carpet) and pet hair, among other things. However, the creature our reader found doesn’t look like a carpet beetle larvae, so even though this is a promising suggestion in many ways, we don’t think it is correct. The only creature we can think of that has segmented thoracic legs (but not fleshly prolegs) and looks approximately like the creature above is the wireworm, the larval form of click beetles. Generally wireworms live in soil, feeding on things like seeds and roots, which is why they can be an agricultural pest, but it wouldn’t be inconceivable to find them in your house. Houses aren’t perfectly sealed capsules, so all sorts of things will find their way in, regardless of whether your house is a good environment for them. This is by no means a definitive answer, and there are problems with it. It’s not clear why our reader would find two worms in different parts of her house, but we suppose this is true of a lot of larvae you might find in your house. Perhaps there is a wireworm population in the soil outside our reader’s home (assuming this scenario is even possible), and the occasional one is making its way inside?

(Update: A few days after posting this, the reader got back to us and said she thinks she found palm flower caterpillars, or Litoprosopus coachella. After reviewing some pictures of these creatures, and having since learned that she has plan trees outside her house, we think she is right.)

This many people searched for this info: 11,021