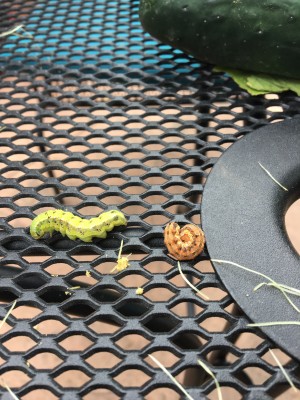 We recently heard from a reader who works on a farm and often takes extra crops home to eat. She brought some corn home and after peeling the ears, noticed several worm-like organisms inside. She hopes we will be able to identify the creatures. In this first photo, we can clearly see one little brown organism crawling up the ear of corn: 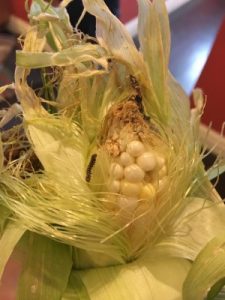 We are confident that our reader has discovered corn earworms, a.k.a corn earworm moth larvae. These caterpillars are common pests of cotton, lettuce, tomatoes, and most notably…corn! Corn earworms are found all over North America besides northern Canada and Alaska. 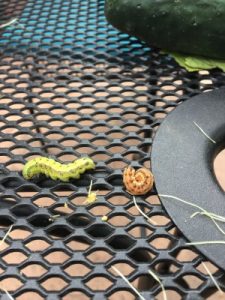 But wait! In this next photo from our reader, there are two caterpillars, one is green and one is brown…Are they both corn earworms? Can two caterpillars of the same species look different? Yes!

Corn earworms are variable in color. The head is usually orange or light brown, and the body can be brown, green, pink, yellow, or black! These caterpillars typically have one dark stripe lining its back, and one smaller light stripe on each side of the dark stripe. Corn earworms also have thorn-like microspines, that give them a rough texture if you choose to touch one. You can see these black microspines on the organism in the first photograph of the caterpillar crawling on the corn. You can see them in the next photo if you look closely: 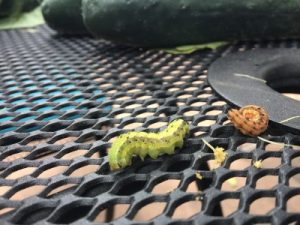 Since corn earworms attack and eat valuable crops, they are often considered costly and destructive pests. They are also rather brutal to their own kind. When they first hatch, several caterpillars might live on one plant and eat side by side. However as the larvae mature, they become extremely aggressive, killing and cannibalizing each other. For this reason, only one mature larva is typically found on each plant. We assume that each of the caterpillars pictured came from different ears of corn. Or they are just uncharacteristically friendly and loving corn earworms. Who knows!

To sum up, we believe the caterpillars our reader found on her corn plant are corn earworms. We hope finding these worms didn’t stop our reader from enjoying her corn, since coming into contact with these larvae isn’t considered dangerous or harmful. 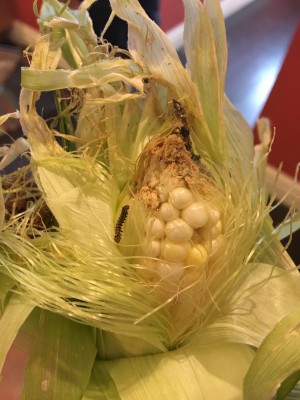 Article Name
Reader Discovers Caterpillars in Corn
Description
We believe the caterpillars our reader found on her corn plant are corn earworms. We hope finding these worms didn't stop our reader from enjoying her corn, since coming into contact with these larvae isn't considered dangerous or harmful.
Author
Dori Franklin
Share the knowledge

This many people searched for this info: 910