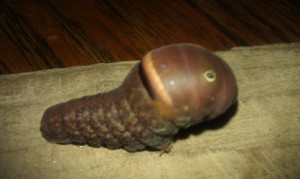 Some time ago, a reader asked us to identify a brown “worm” he found. The creature was brown with a big head, on which there appeared to be two eyes. We placed the word “worm” in quotation marks because the reader did not in fact find a worm, but rather a caterpillar. Of this much we were fairly certain when we first attempted to answer our reader’s question. However, we were unsure exactly what the brown caterpillar was, as in, what precise species of caterpillar our reader came across. Thanks to reader comments, we are now confident that our reader found an Eastern Tiger Swallowtail Caterpillar (Papilio glaucus).

Helpfully, the reader submitted two excellent photos of the caterpillar when he asked his question: 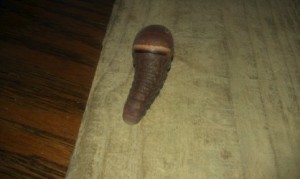 A quick search for additional images strongly suggests that the creature pictured above is an Eastern Tiger Swallowtail Caterpillar. In particular, the photos appear to depict an Eastern Tiger Swallowtail Caterpillar in one of its first three instars (developmental stages), when the creature is brown. During the fourth instar, they turn green, but then they turn brown again in the fifth and final instar. The caterpillars eat the leaves of their host plant to fuel this process of maturation.

Regardless of whether the creature our reader found is an Eastern or Western Tiger Swallowtail Caterpillar, it will have the immediately noticeable large “eyes.” In fact, these are not eyes in any functional sense, but rather eyespots, which serve as a defense mechanism. They can do this in a few different ways. For instance, they can cause creatures to resemble a different sort of animal to hide themselves from predators, or they can divert a predator’s attention from more vulnerable parts of the body.