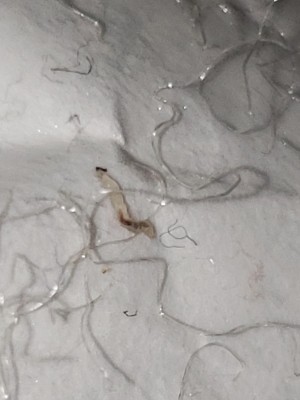 One of our readers sent in this photo of a translucent worm found beside her bed on her mattress sticker. She hopes to identify the creature, which appears to be transparent in color, with a body segmented into separate bulbous parts and a blackish-brown inside, as well as two cerci at its tail (or head; it is difficult to tell from the picture). This can only be seen if zoomed in on the photo. 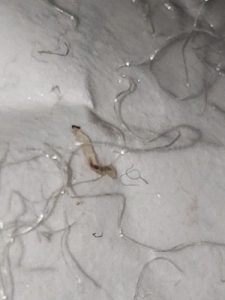 Unfortunately, it is difficult to identify this creature, given the quality of the photo, the lack of size comparison, and lack of identifying features. However, this creature seems to be completely translucent, which is quite rare. One might assume this would help narrow it down to one species, but most worms or larvae that are completely translucent are either nearly microscopic, like the soil nematode, or cluster together in groups, like the dark-winged fungus gnat larva. We thought at first it might be a dark-winged fungus gnat larva, but given this creature being alone, this seems unlikely. Plus, the conditions that these gnats thrive in (compost bins, leaf-litter, and other damp environments) do not match the conditions of a mattress sticker.

If we were to take an educated guess at what this creature is, we might guess an underdeveloped flea larva. Its dark insides and transparency indicate this possibility. Although its lack of bristles (even though it is difficult to tell from the image) and cerci would indicate that it is a beetle larva, this is unlikely given its complete translucency as opposed to the somewhat clear, white color of the common black beetle larva.

Assuming it is a flea larva, this would make sense given where it was found. Fleas can often be found in bedding, either in human or dog bedding. Additionally, some species of flea larvae can be nearly completely translucent, as in the image below. petMD states that fleas have incredibly flexible lifestyles, moving from one stage of development to another when they feel the conditions are optimal: a warm and moist environment. The process from larva to fully-grown flea can take a mere 21 days given prime conditions. 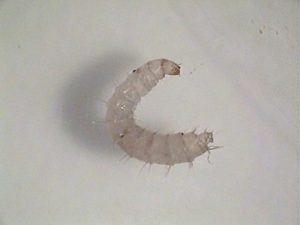 Luckily for our reader, this larva seems to be alone and not in optimal conditions. Regardless, we recommend she disposes of the creature immediately, in the case that it is a flea larva! Although we cannot be 100% sure it is, it is better to be safe than sorry. Fleas are considered pests, and infestations can occur. Not only do fleas bite and cause itchiness to both humans and pets, but they can transmit diseases, parasites and cause allergic reactions. Female fleas can lay up to 50 eggs per day, so this is definitely an issue she wants to resolve before it becomes impossible to eradicate them without the help of professionals.

If our reader starts to notice bug bites and itchiness on her or others in her household, we recommend vacuuming the carpets, washing all bedding and curtains in hot water, and perhaps contacting medical professionals for the bites and pest control for professional cleaning of your house. FleaBites.Net gives decent advice on how to notice signs of flea bites, but because of the larva’s apparent underdeveloped state, its solitude, as well as the fact that it may not be a flea larva at all, our reader probably needs not be too alarmed.

In conclusion, although we are not certain about what species of this critter, we recommend that our reader places the creature outside and stays vigilant for signs of a flea infestation. However, it could very well be an extremely underdeveloped beetle larva or some other creature!

Article Name
Clear Worm On Mattress Sticker May Be a Flea Larva
Description
One of our readers sent in this photo of a translucent worm found beside her bed on her mattress sticker. She hopes to identify the creature, which appears to be transparent in color, with a body segmented into separate bulbous parts and a blackish-brown inside, as well as two cerci at its tail.
Author
Worm Researcher Anton
Share the knowledge

This many people searched for this info: 3,393