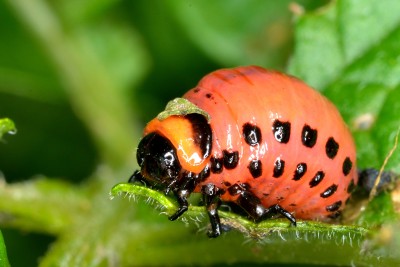 The Colorado potato beetle is a common garden pest that many have to deal with. This article will outline the biology and behavior of potato beetle larvae and give some insight into how to deal with infestations of this pest. 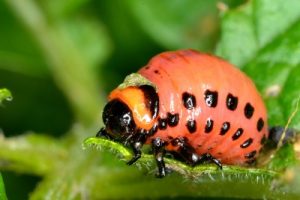 Despite what their name might imply, Colorado potato beetles can be found all over North America, and not just in Colorado. Thus, they are a common problem among gardeners and farmers all over the continent. These insects, when fully matured, are yellow or white with black stripes on their wings and are quite cute in our humble opinion! Unfortunately, as we have mentioned, these critters can be quite the nuisance as both the larvae and adults of the Colorado potato beetle will feed on and even kill potato plants in short amounts of time. That is if the infestation is big, which it often is given that over a short period of time a female beetle can lay more than 500 eggs, which will hatch in a short time span of four-to-nine days. It should also be noted that these creatures do not only feed on potato plants, but even peppers, tomatoes and eggplants, hence making them even more harmful to crops. They have posed many problems across the continent for farmers, who have tried and failed to rid their crops of the beetles using insecticides. The failure is due to the potato beetle’s resistance to insecticides, thus making their eradication and control extremely difficult.

On that note, how does one control populations of potato beetle larvae? First of all, it is important one knows what to look for. The larvae of the Colorado potato beetle are red in color, with two rows of black dots on either side of their body. They have glossy black heads, and three pairs of black forelegs. Secondly, it is vital that we note that while most sources do advocate the use of insecticides, we will not. Not only have these beetles proven that they can become resistant to the use of insecticides, but we rarely recommend the use of dangerous chemicals when dealing with infestations. This is because we neither recommend killing creatures, nor the use of chemicals like this on crops that will later be consumed and so which can pose potential health threats. Thus, the only effective measure of control for Colorado potato beetles is hand-picking the adults and larvae straight off the leaves. Unfortunately this will likely not completely eradicate an infestation, but the University of Kentucky’s entomology department does suggest that hand-picking is “particularly effective in reducing the numbers of overwintering beetles coming to the young plants in the spring.” If any of our readers are dealing with this issue and know that they need more effective measures to be taken, then we recommend contacting professionals to deal with the infestation.

To conclude, this has been a brief guide to the Colorado potato beetle. Although there are unfortunately not many methods of dealing with these critters without the use of insecticides, we hope that our readers were nonetheless able to take something useful or informative away from this article. We also hope that our readers continue to stay safe, warm and inside during these unprecedented times!

Article Name
Colorado Potato Beetle Larvae and What To Do About Them
Description
The Colorado potato beetle is a common garden pest that many have to deal with. This article will outline the biology and behavior of potato beetle larvae and give some insight into how to deal with infestations of this pest.
Author
Worm Researcher Anton
Share the knowledge

This many people searched for this info: 733