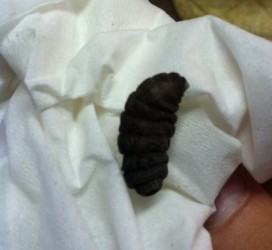 A reader wrote to us a few days ago about some “fat short brown” larvae she is finding in the her kitchen cupboards. (Yes, she did actually refer to the creatures as larvae, breaking with the common practice of calling larvae “worms,” which they technically aren’t, insofar as “worm” has a precise meaning.) The reader found the brown larvae (which might also be described as black) near a dead mouse, which had recently been killed by a trap. The reader speculated that there might be some connection between the two, a reasonable enough assumption that we will pursue below. Although the reader only found two of the larvae, she was still understandably concerned about them. She asked us what the brownish, blackish larvae are, and if she should be worried about them.

(The reader also included a picture of the dead mouse, but we’ll spare you.)

Since we already have articles that cover the basics of BSFL, we’ll focus on the reader’s specific situation. First, the dead mouse. Does this have something to do with the presence of these creatures in the cupboard? Yes, or it would be highly coincidental if this weren’t the case. BSFL are commonly used in composting operations, and of course compost bins are filled with food waste, some of which is from animals. So, BSFL can certainly break down the matter that composes dead animals. We have not directly heard of them consuming a dead rodent, but we see no reason why this isn’t possible. BSFL are, after all, the larvae of flies, which makes them maggots, and most of us have probably seen those disturbing pictures of thousands of maggots eating a dead animal. This is the process that is probably going on in our reader’s cupboard, but obviously (and thankfully) on a dramatically smaller scale.

Should our reader be concerned about finding BSFL in her house? Not really, and she won’t have any problems with them once she removes their food source (the dead mouse, in this case). And even if a BSFL or two lingered around the house, this isn’t cause for concern. The larvae themselves are totally harmless – they do not bite or sting, and they contain no venom. Once they mature into flies (their adult form), they are also not dangerous (or annoying: they don’t really fly around, and they can be moved easily because they aren’t scared to be touched.) We have written about the harmlessness of black soldier fly larvae before, so we encourage our reader to check out that article if she wants more information.

So, to conclude, our reader probably found black soldier fly larvae, and she has no reason to be alarmed. Of course, she’ll want to clean up her cupboard and remove the larvae she found, but that should take care of the situation.

17 thoughts on “Brown Larvae in the Cupboard”