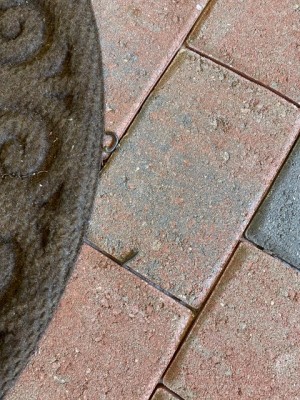 Worms have been appearing from this woman’s mulch, or so she has been told, and she wonders how she can be rid of them. The worms in question are small in comparison to the mat in the photograph and are brown in color. More detail than that is difficult to discern given how far away the photo was taken. 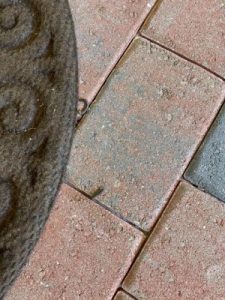 According to our reader, it is her “complex” that lays down the mulch around the houses in her vicinity, and the worms that have been appearing because of it are crawling on her house and have also gotten into her house. She says she does not think that the worms bite, but that they are a nuisance. In regard to the mulch, the jumping worm is the most famous example of a worm that feeds on mulch. Jumping worms are a type of earthworm, which one can tell by their brownish/purple appearance and possession of a clitellum, and yet common views of jumping worms stray from the typical consensus that earthworms are environmentally beneficial and kind creatures. Jumping worms wriggle violently when disturbed, and are considered a threat to forest ecosystems (depending on the context). However, as jumping worms tend to be bigger than the worms in this photograph, which also lack clitellums (as far as we can tell), we doubt that these are jumping worms, though it is still an option worth considering.

Regardless, our reader did not specifically ask about the identity of the worm, but rather just how to get rid of them. We will not be able to provide much advice on how to get rid of the worms that would not include the use of pesticides/insecticides (which we almost never recommend) or the removal of the mulch (which is probably not possible given that it is our reader’s complex that put it down), however, we can advise our reader on the control of this infestation. In terms of keeping worms off the house itself, a mustard-water cocktail or diluted vinegar spray are both good options for repelling worms, especially earthworms (if that is what they are) and may help in keeping them off her house. Furthermore, in terms of keeping worms out of her house, our reader will want to ensure that, where possible, she seals all the cracks in her walls and flooring that any small creature could possibly crawl through. Additionally, replacing any faulty or damaged window screens is paramount to ensuring that no insects or creepy crawlies of any kind find their way into one’s home. A window screen of prime quality does more than keep the odd horsefly out.

In conclusion, although it is uncertain what these worms are, we hope that the advice listed above can still be of help to our reader. We recommend that if she wishes to get rid of the worms that she contacts her complex and informs them of the problem, and/or that she contacts a professional who specializes in insect/worm infestations who is capable of providing aid in person.

Article Name
Brown Worms Appear From Mulch Surrounding House
Description
Worms have been appearing from this woman's mulch, or so she has been told, and she wonders how she can be rid of them. The worms in question are small in comparison to the mat in the photograph and are brown in color. More detail than that is difficult to discern given how far away the photo was taken.
Author
Worm Researcher Anton
Share the knowledge

This many people searched for this info: 1,395