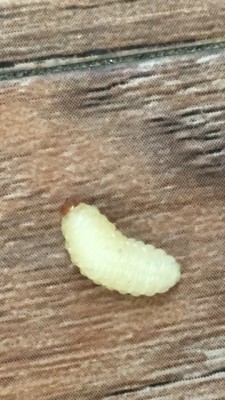 White Larvae Falling From the Ceiling May Be Root Weevil Larvae

A property manager was contacted about “maggots falling from the ceiling” by the residents in an old building in Southern California, and in turn contacted us about receiving an identification of these “maggots”. He states that he was brought to us by an old article about root weevil larvae, but doubts that that is what these worms are. 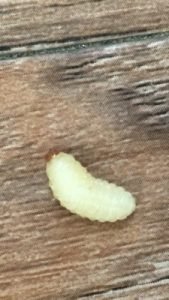 In addition to the much-appreciated images, our reader provided a great deal of context. The building where the “maggots” were found is over one hundred years old, with a wooden “roof system”, which consists of an insulated “open timber framing” and “old composite trusses”. What is important to take into account is the fact that the house has no attic, there is no dirt or planter outside, and there are no signs of dead animals or decomposing organic matter in the rafters. The worms have been falling in a line by the front of the building, which is definitely curious, to say the least. Our reader guesses that these may be the larvae of a wood boring beetle, yet the shape of these worms does not exactly match that of a wood boring beetle larva. He has been informed by his “termite guy” that the creatures are not termites and by his “pest guy” who reports that they are not maggots. We would also agree with these statements, but add that they do better resemble root weevil larvae.

Root weevils are types of snout beetles and get their name from the fact that they mature on the roots of plants. They have a penchant for leaving distinct bite marks around the leaves of the plants they feed on, to which they can be quite harmful. For that reason they are also considered garden pests, and gardeners and farmers will often try to get rid of them should they discover an infestation. Of course, since our reader mentioned that there is no dirt or planter outside the house, one might suggest that assuming these insects are root weevil larvae would not make much sense. However, it is quite common for some species of root weevil larvae to wander inside homes, such as the hairy spider weevil. It should be noted that the hairy spider weevil is incredibly small, and given our reader’s measurements, which tell us that these larvae were ‘3/16″ to 1/4″‘ in length, it is not possible that these larvae are hairy spider weevil larvae. In fact, one could fit multiple fully grown hairy spider weevils on a single penny. Additionally, while we were going to suggest that the root weevil larvae could be falling from the ceiling because a pregnant root weevil wandered in and laid eggs up in the rafters, root weevils cannot fly. Perhaps it is possible for a root weevil to have climbed the walls all the way up there, but it seems unlikely. 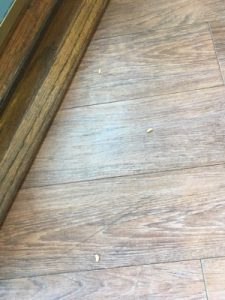 On the other hand, wood-boring beetles are, as their name suggests, beetles that chew through wood. As a result, they leave behind holes and tunnels in the wood they bore through, as well as wood powder, which resembles sawdust. This makes them a nuisance and even a danger as they can weaken a wooden structure. Furthermore, they lay their eggs in the cracks and holes they create in the wood, thus spawning more beetles. Because of the fact that these beetles leave behind visible holes and wood powder, and our reader stated that the roof was “new, and clean”, we doubt that these worms are wood-boring beetles.

Article Name
White Larvae Falling From the Ceiling May Be Root Weevil Larvae
Description
A property manager was contacted about "maggots falling from the ceiling" by the residents in an old building in Southern California, and in turn contacted us about receiving an identification of these "maggots". He states that he was brought to us by an old article about root weevil larvae, but doubts that that is what these worms are.
Author
Worm Researcher Anton
Comments: 0 Posted by: Worm Researcher Anton Categories: Garden Worms, Worms Found in the House, Worms Generally