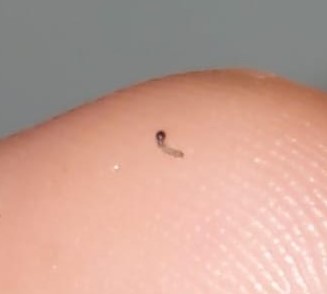 Uncertainties as to the Identity of these Thread-Making Larvae

“Tiny worm-like creatures” were found hanging “by a thread of some sort” in this man’s home in Dubai. The creatures in question appear to be minuscule in size (as seen in the photograph below) and transparent, with a bulbous black head. 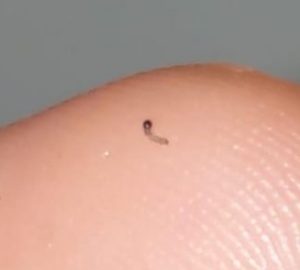 Our reader adds that he could not identify the worms as silkworms or inchworms, and so wonders if we can tell him what they are so that he may treat the issue. Furthermore, he states that the worms “came out of nowhere”, and that he has found the worms in many spots in his home. The worm on his finger was found hanging “on its ‘thread’ by the wall”, a group of others were found on a web (pictured below), and lastly he found the spot where the worms seemingly hatched from (also pictured below). 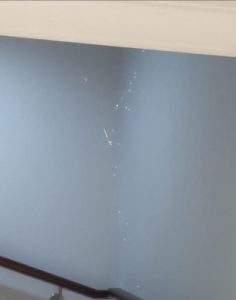 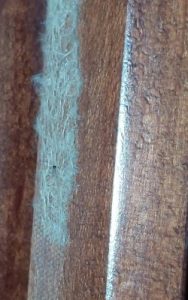 Firstly, we would agree with our reader in saying that these are not silkworms, nor inchworms, simply given their size and coloration. Secondly, these worms are so tiny that it would be quite difficult for us to pinpoint their exact species. Their physical characteristics are quite typical of many larvae, and so they could grow into just about anything. If anything, we might venture to say they are some kind of moth larvae. They definitely do not appear to be any parasite of sorts, or any other harmful larvae for that matter. So, our reader does not need to fear for his safety.

Thirdly, although we are unable to provide a confident identification of the larvae’s species, what we can provide is some general tips on how to deal with this infestation. Typically, the first step to dealing with any bug infestation is locating the source, and it is excellent that our reader seems already to have done this. Vacuuming up the webbing should suffice in ridding that area of any unhatched eggs or other organisms that may be residing there. Next, removing all roaming larvae that are found by simply moving them outside will help to prevent them maturing inside the home and breeding more larvae. Also, if these are moth larvae, they will want to hide in small, dark spaces. Hence, checking underneath furniture, in cupboards and drawers, or in the folds of clothing and other fabrics might yield discoveries of more larvae that can be moved outside. To prevent more larvae from entering the home, ensuring that all cracks in flooring and walling are sealed (where possible) and that window screens are in prime condition will ensure that any tiny critter is unable to enter one’s home simply by walking in. 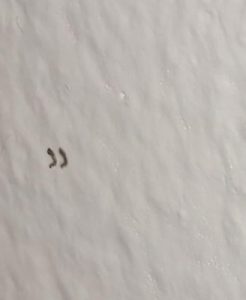 Furthermore, if our reader wants to get a specific identification of the species, we recommend taking a couple of the larvae and putting them in a container with air holes and some food and waiting for them to mature. This way, the larvae will take on more defining characteristics and it will become easier to tell what species they are. If our reader does this, he may feel free to send in more pictures to us so that we can have another go at identifying these creatures.

To conclude, we are not certain as to the identity of these “worm-like creatures.” Their size, paired with their apparent ability to build webs and hang by threads makes it difficult to discern their exact species. Regardless, our reader should have nothing to worry about in regards to safety, and we are sure that if our reader follows the methods listed above, he will be rid of these creatures in no time.

Article Name
Uncertainties as to the Identity of these Thread-Making Larvae
Description
"Tiny worm-like creatures" were found hanging "by a thread of some sort" in this man's home in Dubai. The creatures in question appear to be minuscule in size (as seen in the photograph below) and transparent, with a bulbous black head.
Author
Worm Researcher Anton
Comments: 1 Posted by: Worm Researcher Anton Categories: Worm Castings, Worms Found in the House, Worms Generally