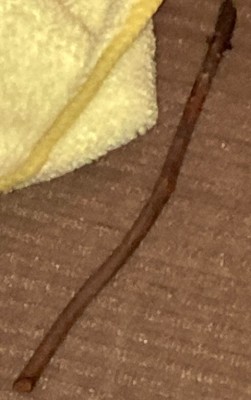 “I found this thing on my back deck on some rugs I took out to shake,” says this reader about the long, brown object in the photograph below. Our reader says that “it had split at the darker end” but that it is “tubular at the other end.” 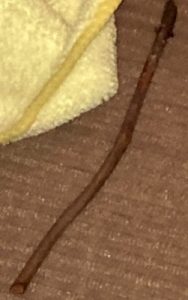 Besides the photo, our reader provides no more information than this. Now, upon looking at this photograph, we realized we had seen nothing quite like this before. To be quite frank, this looks like a stick to us; the chopped off end, and the knobby, darker end look like qualities of a piece of wood. That being said, we trust that our reader would not have sent a picture of a stick to us, so this must be some sort of organism or piece of organic matter. Naturally, when one hears of organisms that resemble sticks, the first thing that comes to mind is stick insects. However, stick insects are far thinner than this, and will have smaller branches extending outward from their core that act as their limbs. Hence, we can rule this out as a possible identification.

We must be quite honest here and say that this photo had us stumped for a while (no pun intended). Eventually, we realized, as most people looking at photos of worms and caterpillars must realize, that the worm is likely not as long as it appears to be in the photo, since it is a close up. For that reason, we concluded that this is a stick caterpillar. In actual fact, there are a number of species of caterpillars that look like sticks, and they all fall under the name Geometridae. They are also all inchworms, meaning they are moth caterpillars that have legs at the front and back of their bodies, thus forcing them to move along a surface inch by inch as they arch their back with every step. Between the 300 species or so of stick caterpillars, their physical characteristics vary, but generally they take on a very convincing appearance of a stick, often having warts that resemble knots on a tree trunk like we see in the photo our reader sent. There are no recorded stick caterpillars that are poisonous, carriers of pathogens, or harmful in any other way. Of course, we still advise taking some form of precaution when handling unfamiliar organisms (such as wearing garden gloves or using a dustpan), and we recommend that our reader merely move the caterpillar outside, where it will be much happier in its natural habitat.

To conclude, the “thing” our reader found on her back deck when shaking out her rugs is a stick caterpillar. These friendly creatures should not bother our reader, and this one likely ended up on her rug by accident. We hope that this article helped our reader and proves insightful. If she, or any of our other readers, have more questions about stick caterpillars, we would be more than happy to receive them in the comments section below.

Article Name
Brown, Stick-like Worm Found on Deck is a Stick Caterpillar
Description
"I found this thing on my back deck on some rugs I took out to shake," says this reader about the long, brown object in the photograph below. Our reader says that "it had split at the darker end" but that it is "tubular at the other end."
Author
Worm Researcher Anton
Share the knowledge

This many people searched for this info: 1,102