“I found a worm-like insect […] on my clothes” begins this reader in her query to us about the “black or dark brown”, “tall” bug she discovered on her newly-washed clothing. She asks that we identify the bug, as well as tell her how to get rid of it.

To start off with, it is important to note that, without a photograph, we will unfortunately not be able to provide a confident identification. That being said, we can give it our best shot using the context and physical descriptions of the insect our reader has provided. She states that upon discovering the insect on her clothing she panicked, because most of her clothes are new and her washing machine is clean. She proceeded to read up on moths that are “attracted by water and damp clothes” which “might have laid eggs” on her clothing, and she thinks this might be that. In that case, the insect would be a mother clothes moth of some sort, either a webbing clothes moth or a casemaking clothes moth. However, given that the coloration of the insect our reader found (black) being the polar opposite of a clothes moth’s color (white), we would not venture to say that this is a clothes moth.

So, what might it be instead? Given the location in which it was found, on clothing, we might still assume that it is a pest that is attracted to either damp locations or clothing, or both. This brings us to the black carpet beetle. The black carpet beetle is much like any other carpet beetle, except for one key difference which lies in the diet of their larvae. While the diet of the ‘regular’ carpet beetle larva consists of animal skins, feathers and fur, as well as animal-based materials such as clothing and carpets, the black carpet beetle larva will also eat synthetic materials (polyester, nylon, vinyl and so forth). For that reason, clothing of various makes are far more susceptible to black carpet beetles. This reader might be right in that case, that this black carpet beetle is attempting to, or has laid eggs on her clothing. That said, it should be noted that the beetle would not have already been inside the washing machine, but was more likely already on the clothing before it entered the washing machine. If it is still alive, then that is a different story, so if our reader would like to clarify if the insect was found dead or alive, she is welcome to share that information in the comments section below. 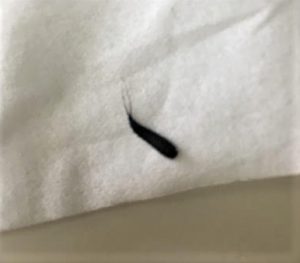 Now, this might sound odd, but our reader should consider herself lucky. Normally, carpet beetle infestations can go on for a long time before the inhabitants of the home realise their infestation, and by that time a lot of damage could already have been done. Upon discovering such an infestation, one is often required to vacuum their entire home and launder all of their textiles in order to eliminate the infestation. Yet, in our reader’s case, she not only discovered the mother beetle (potentially), but she discovered it on an already-laundered set of clothing. This means that any eggs she might have laid on the clothing would already have been eliminated (given that our reader did not do a cold wash). Of course, carpet beetles can lay eggs multiple times in their short 2-6-week lifespan, so it is possible it has laid eggs in other places. We recommend that our reader scan her home for more roaming larvae, and if she wants to give her home a quick vacuum and launder her clothing (especially ones that have gone unused for long periods of time) just to be sure, that is not a bad idea either. For more information on dealing with carpet beetle infestations, our reader can refer to the article linked above.

In conclusion, the “black or dark brown” insect our reader found on her clothing is likely a black carpet beetle, though without a photo we cannot say for certain. If this is the case, then we think it very likely that our reader prevented an infestation before it happened, and that the mother beetle has not laid more eggs in other places. Of course, this could just be wishful thinking, so our reader best check her home for more signs of an infestation and give it a good cleaning just to be sure; carpet beetle larvae infestations can be quite destructive and very hard to eliminate once they go on for some time! We wish our reader the best of luck and hope that this article proves insightful.

Article Name
Black or Dark Brown Insect Found on Freshly-Laundered Clothing is Likely a Black Carpet Beetle Larva
Description
"I found a worm-like insect [...] on my clothes" begins this reader in her query to us about the "black or dark brown", "tall" bug she discovered on her newly-washed clothing. She asks that we identify the bug, as well as tell her how to get rid of it.
Author
Worm Researcher Anton
Comments: 0 Posted by: All About Worms Categories: Carpet Beetle Larvae, Pest Worms, Worms Found in the House