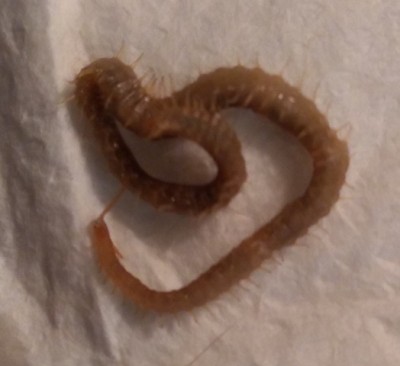 “Is this strange, worm-like creature parasitic to my dog?” asks this reader about the long, multi-legged creature photographed below. This beige-colored worm with antennae on its head has our reader worried for his dog, who “threw up with specks of blood” prior to the creature’s discovery, and who already has fleas our reader is trying to control. 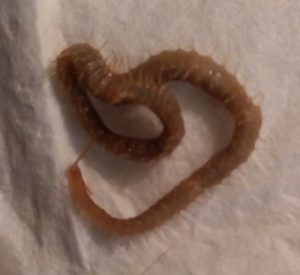 We might as well get right to the point and say that this creature is not a parasite of our reader’s dog, but is actually a centipede. This critter likely just wandered in through an open door or window, or perhaps our reader’s dog carried it in, perhaps without meaning to. Centipedes are predatory arthropods, which is a fancy way of saying that they eat other creatures, and that that they are worms with segments and an exoskeleton. There are several thousand species of centipedes, and they come in various colors and sizes. Some are as small as a house spider, while some are as big as mice (if not bigger). Additionally, there are many species of centipede that resemble the one our reader caught on photo, one such species being the Western Yellow centipede. Nonetheless, they all share common characteristics. For one, they all have the characteristic antennae sprouting from their heads, which they use as a substitute for their poor eyesight. Secondly, they all have dozens of legs sprouting from their sides, one pair of legs per segment. Despite their name meaning 100 legs, no centipede has exactly 100 legs, though some species have been known to have more than 100 legs. Centipedes are also not to be confused with their cousin the millipede, whose legs grow underneath their bodies and are often not visible as a result. In addition to this, most millipedes are not predatory (with the exception of a few species), nor venomous, and they will not bite or sting. 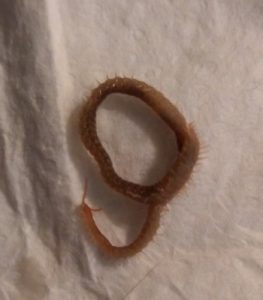 On the other hand, centipedes do possess venom and can bite. That being said, a centipede of this size will not possess enough venom to seriously harm as big of an animal as a dog or human. Their diet consists of various other insects, such as termites, moths and spiders. The giant species of centipede will hunt bigger prey such as small rodents, birds and frogs, though never dogs or cats. Either way, this centipede clearly does not belong to the family of giant centipede species. With that in mind, a bite from one of these smaller centipedes could still sting and cause symptoms of irritation or rash, and so they should be handled with caution. Furthermore, a dog swallowing one might result in throwing up, but our reader mentioned that his dog threw up after he found the centipede, so the two are probably not connected. Centipedes also have no known relationship to fleas, so those two cases are also not connected. In any case, we suggest that our reader take his dog to the vet, both for the fleas and the bloody vomit, as only they are qualified and capable of diagnosing this problem.

To conclude, the “strange worm-like creature” our reader found is a centipede. While they are dangerous to insects, and sometimes smaller animals, they should not be able to cause our reader’s dog to throw up blood. Nonetheless, we urge our reader to take his dog to the vet for the problems he does have, and of course it doesn’t hurt to mention the centipede just in case, as we cannot say anything with 100% certainty and our knowledge is unfortunately limited. We wish our reader and his dog the best of luck!

Article Name
Multi-legged, Yellow Worm-like Creature is a Centipede
Description
"Is this strange, worm-like creature parasitic to my dog?" asks this reader about the long, multi-legged creature photographed below. This beige-colored worm with antennae on its head has our reader worried for his dog, who "threw up with specks of blood" prior to the creature's discovery, and who already has fleas our reader is trying to control.
Author
Worm Researcher Anton
Share the knowledge

This many people searched for this info: 1,018