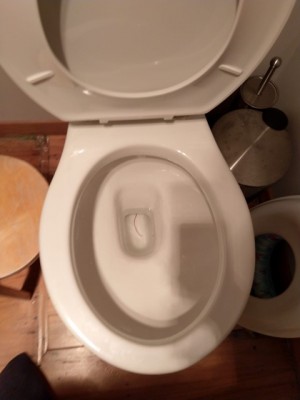 Worm in Toilet is Nothing to Worry About

One of our readers recently asked us about a worm she found in her toilet. She explained that the toilet hadn’t been used for hours, so she doesn’t suspect that it came from her or any of her family members. However, she is still a little freaked out by it and would like to know what it is. 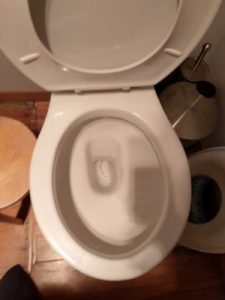 She took the photo pretty far away from the toilet, so we don’t have a great view of it. We can see that it is thin, long, and has a pink hue. We believe this is either a bloodworm or an earthworm! Both of which can be similar in appearance and are found in toilets from time to time. Since we can’t really see the worm, we aren’t able to distinguish if it is a bloodworm or an earthworm, so we will discuss both.

Earthworms are found in toilets by our readers all of the time. They vary in appearance, typically ranging from 3 to 5 inches long. They can be purple, brown, red, or pink, but they always have segmented bodies. Earthworms breathe through their skin via osmosis, but their skin must be wet in order for this to happen. If they dry out, they can suffocate and die. Therefore, earthworms need a moist environment to live, and can even live submerged in water for long periods of time as long as it has enough oxygen in it.

If the creature our reader discovered is an earthworm, it probably got into her toilet via the pipes. As long as she only found one, she doesn’t need to stress. If she continues to find them, there might be an issue with her plumbing, but this is quite unlikely. We recommend flushing the worm or removing it by hand and placing it outside. If she finds more earthworms in the next couple of weeks, then she can think about having her pipes looked at. If she doesn’t find any more, she can move on!

The other specimen this might be is a bloodworm. Bloodworms, or midge fly larvae, are small bright red worms that live in polluted waters. When they are found in toilets, it is a sign that the toilet needs to be cleaned! If our reader thinks this is a bloodworm, she should scrub out her toilet using a cleaning agent designed to eliminate organic material. Once her toilet bowl and drain is free of gunk, the bloodworms will have nothing to eat and won’t be an issue!

Whether she is dealing with earthworms or midge fly larvae, our reader doesn’t need to worry. Neither specimen is considered dangerous or known to carry/transmit human diseases. While we believe she has found one of these, we do want to mention that if she is at all concerned this came from her body or worried about her health then she should see a doctor ASAP. We are not medical professionals and therefore cannot give medical advice of any kind.

Article Name
Worm in Toilet is Nothing to Worry About
Description
One of our readers recently asked us about a worm she found in her toilet. We believe this is either a bloodworm or an earthworm!
Author
Dori Franklin
Comments: 0 Posted by: Worm Researcher Dori Categories: Earthworms, Worms Found in the House