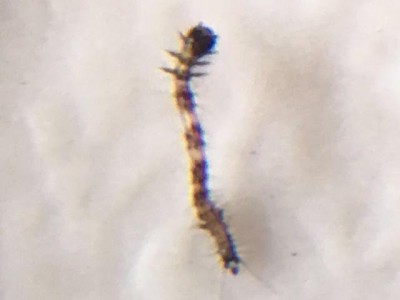 We recently heard from a reader who discovered an interesting creature in his bathroom. He explained that he discovered the specimen hanging from a thread from the ceiling, like a spider. He also mentioned that he has been dealing with some leaks in his apartment, and wonders if the moisture might be in relation the creature. This is the picture he sent: 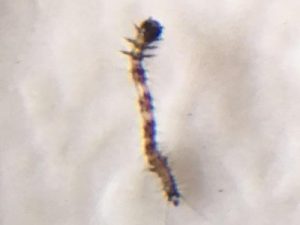 At first glance, we thought the specimen was a drain fly larva. Drain fly larvae are extremley common household pests, especially in bathrooms. They live in the organic matter that builds up in sink, toilet, and tub drains. They are tiny translucent and black larvae, so in other words they have some resemblance to the specimen our reader found. However, the more we examined the photograph, the more we thought that this was actually something else!

To end, one of our readers discovered a worm-like organism in his bathroom. We think the specimen might be a stick caterpillar, which is a type of inchworm. Finally, we aren’t able to determine if the added moisture from the leaks is related to the presence of this specimen or not.

Article Name
Worm in Bathroom Might be Stick Caterpillar
Description
One of our readers discovered a worm-like organism in his bathroom. We think the specimen might be a stick caterpillar, which is a type of inchworm.
Author
Dori Franklin
Share the knowledge

This many people searched for this info: 2,609