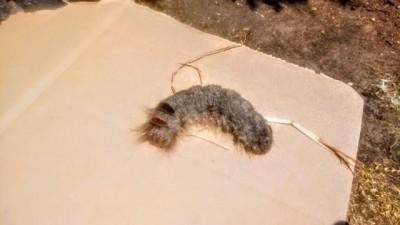 One of our readers recently got in touch with us from Israel. He found a worm-like organism in his garden. He didn’t ask any specific questions, but we assume he is curious about the species of the creature. He provided an excellent photograph: 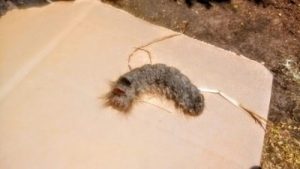 The creature in question has a gray body with two bands near its head. It has long brushes of gray hair lining the edges of its body. This is a caterpillar, which is the larva of a moth or butterfly. To be specific, we believe this is the larva of a Lasiocampidae moth.

Lasiocampidae are a family of moths that are commonly referred to as lappet moths, snout moths, and eggars. Each of these nicknames has significance. Lappet means a small fold or or flap, so the name “lappet moth” stems from the decorative skin flaps on the caterpillar’s prolegs. Their nickname “snout moth” is because of the protruding mouth parts of certain species that looks like a large nose. Finally, the name “eggars” comes from the egg-shaped cocoon of some species. There are 2,000 known species of Lasiocampidae moths around the world, and potentially many more that haven’t been named or studied!

Lasiocampidae moths feed on many different trees and shrubs, which means they are general feeders. Plenty of species of caterpillars have only one specific host plant or host plant family, so being a general feeder is a bit of an anomaly. Our reader didn’t mention where specifically in his garden he found this caterpillar, but if he noticed it on a plant, then that might be its host plant! These caterpillars aren’t known to be dangerous, but sometimes the hair of caterpillars causes irritation, so we wouldn’t recommend touching the caterpillar directly.

To conclude, a reader found a gray caterpillar in his garden in Israel. We are confident this caterpillar is a Lasiocampidae larva.