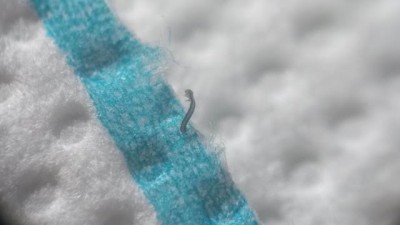 A reader found several little grey worm-like organisms in his bathroom. He discovered the larvae as they hung from a thread and climbed up the sink. First he thought they were drain fly larvae, but ruled that out after looking up photos online. The creatures move quickly by bending in the middle: 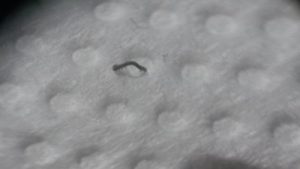 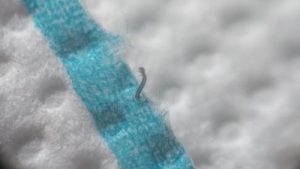 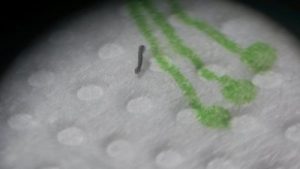 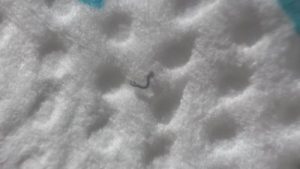 These are geometer moth larvae, commonly known as inchworms! Even though inchworms have the word “worm” in their title, they are not actually worms…they are larvae! An inchworm has legs on both ends of its bodies, but none in the middle. When it walks, it shifts from one end of its body to the other, which causes it to arch  its body as it walks. The first photo captures this very well. This movement is also where the name “inchworm” is derived from. Some people believe these little creatures look like measuring tapes, measuring the earth inch by inch as they walk.

There are about 35,000 species of geometer moths and larvae. The larvae coloring ranges from brow, gray, or green. Inchworms use their color scheme to camouflage into their backgrounds as a defense mechanism. Different species of inchworms eat lichen, flower, or pollen, and some are even carnivorous. However, most inchworms eat fruit or leaves.

We don’t know why these caterpillars are in our reader’s bathroom. Maybe they snuck in through an open window or door. Since inchworms typically feed on leaves and fruit, they likely won’t find a good meal in the bathroom. Our reader should place the worms he found back outside, and close any open windows or doors that might have lead to their initial entrance into his home. If he believes his yard is overpopulated with inchworms, there are some natural predators he can introduce. For example, wasps, yellow jackets, and ground beetles all eat inchworms.

In conclusion, a reader found small grey worms in his bathroom. We recognized them as inchworms after observing the arched backs and anterior and posterior legs.