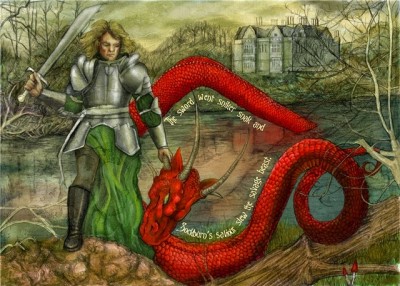 The Fictional Worms of British Legend

Most of the articles we write are on the very much real worms that our readers find around the world. However, this article will take a look at some of the fictional worms that have been presented throughout history.

Unfortunately, legend and fiction give worms a bad rep. When you look at their representation in anything from Peter Jackson’s King Kong movie to British folklore, worms are represented as monstrous beings that plague civilization. This article will cover three different fictional worms, namely: the Lambton worm, the Sockburn worm and the Linton worm. It should be noted that although the Mongolian deathworm is one of the most famous fictional worms, we will not be covering it as we have already written full-length articles about it.

Firstly, the Lambton worm hails from Durham in North England, and is really depicted as a dragon, but the term ‘worm’ was used to describe dragons and serpents. Perhaps this is due to its worm-like shape and lack of legs, thus resembling a Chinese dragon. The worm was first written about during the 16th century, when an Italian supposedly brought in a monstrous worm of 16-feet, which was bigger than a horse and supposedly devoured over 1000 people and demolished an entire country. Due to its brutal reputation, the Lambton worm has become ingrained in Durham legend and is part of many folktales. However, there is also another dragon/worm from Durham that has had prominence. 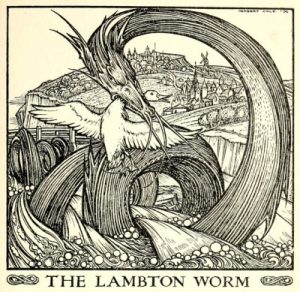 Finally, we come to another worm-like dragon called the Linton worm, which hails from Scotland. It is said to reside in a place commonly referred to as the ‘Worm’s Den’ but what is actually a hollow on the side of Linton Hill on the Scottish Borders. The Linton worm would come out of its dwelling to hunt the livestock that grazed nearby, and would also eat anything else that intercepted its path. This creature was written about as far back as the 12th century, and was described as being three yards long. The Linton worm wreaked all kinds of havoc in its local area and accordingly left it a wasteland. The beast was legendarily slain by a Scots laird called John de Somerville, who rode up on his horse and sunk a burning lance down the worm’s throat. 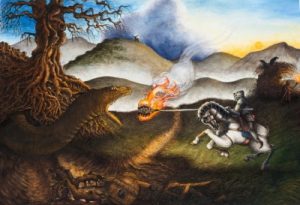 To conclude, this has been a short guide to three legendary worm-like creatures from fiction. Of course, some people from these areas may claim that it is not fiction, but this is a matter up for debate. We hope our readers enjoyed this rather different article and that they learnt something fun from it! If any of our readers would like a follow up to this with examples of more worms from fiction, they are welcome to add to our list in the comments section below!

Article Name
The Fictional Worms of British Legend
Description
Most of the articles we write are on the very much real worms that our readers find around the world. However, this article will take a look at some of the fictional worms that have been presented throughout history.
Author
Worm Researcher Anton
Comments: 0 Posted by: All About Worms Categories: Books About Worms, Interesting Worms, Worms in Art