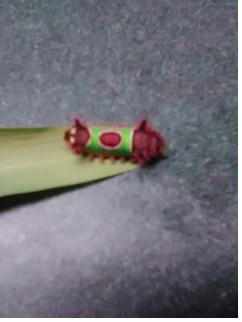 When you think of worms and worm-like creatures, maybe the word ‘beautiful’ isn’t the first word that comes to mind, but when it comes to caterpillars, there are unarguably a plethora of pretty ones that will take your breath away. This article will briefly outline some facts about three of the most breathtaking caterpillars in the world (in our humble opinion).

First, let’s take a look at the stinging rose caterpillar. This caterpillar is the larval stage of a stinging rose moth, and feeds on a variety of plants such as apple trees, oaks and rose bushes, where they eat leaves in order to store energy for their eventual metamorphosis. A fully grown caterpillar can reach a length of 7/8-inches, is yellow with a purple stripe running down its middle, and has long bristle-like appendages extending from both sides of its body. These critters are usually found during the summer in the Eastern parts of the USA. However, despite its pretty appearance, the stinging rose caterpillar, as per its name, does sting, potentially leaving behind an itchy rash or even triggering an allergic reaction. It does this with its bristles, which contain the venom capable of eliciting these reactions. Additionally, the bristles can actually detach from its body to lodge into the predators that the caterpillars wish to ward off. 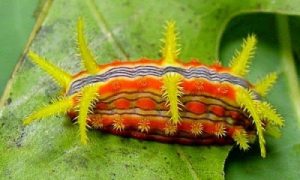 Secondly, we come to the hickory horned devil. The hickory horned devil is the name given to the caterpillar of the regal moth, otherwise known as the royal walnut moth. This moth is one of the largest species of moths in Florida with a maximum wingspan of 15.5cm (roughly 6-inches), and like the stinging rose, the hickory horned devil is normally found in the Eastern states of the United States. The larvae are usually easiest to observe when they are fully grown and have left the cover of the tree species they inhabit to find a place to pupate. They can reach a length of 14cm (5.5-inches), and as seen in the picture above, are a blue-green color with orange/black bristles. The bristles are especially long on the caterpillar’s head, thus giving it its name. However, despite its appearance and name, the hickory horned devil is completely harmless toward humans. That is not to say that allergic reactions upon skin-to-skin contact are impossible, so we still advise wearing protective gear were any of our readers to stumble upon one of these critters. 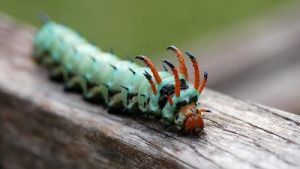 Third and last, we have the saddleback caterpillar. The saddleback caterpillar is the larval stage of the limacodid moth/slug moth, which is not nearly as aesthetically interesting as the caterpillar. The caterpillar is an array of colors, with greens, oranges and blacks all making up different parts of its body. The name ‘saddleback’ comes from the spot on its otherwise green back which is the same reddish-brown color as its ends. The longer bristles/appendages are black and the shorter ones are orange, all of which have smaller bristles sprouting from them, giving the caterpillar a somewhat ferocious appearance. These bristles, which are referred to as “spines” by the University of Florida are venomous and, like those of the stinging rose caterpillar, can detach from the caterpillar’s body to embed themselves in other creatures or areas. Contact with these spines can cause tissue damage, so touching one of these is likely not the best idea. The spines can also be used as a supplement to the caterpillar’s adhesive abilities to securely stick to surfaces.

In conclusion, this has been a very brief guide to three caterpillars that we consider beautiful to behold. We hope that our readers found this article interesting, and if they have any other caterpillars that they find particularly stunning, they are welcome to comment their names below. On that note, if our readers want a part two to this article, they may also voice their request in the comments section.

Article Name
Three of the Most Breathtaking Caterpillars
Description
When you think of worms and worm-like creatures, maybe the word 'beautiful' isn't the first word that comes to mind, but when it comes to caterpillars, there are unarguably a plethora of pretty ones that will take your breath away. This article will briefly outline some facts about three of the most breathtaking caterpillars in the world (in our humble opinion).
Author
Worm Researcher Anton
Share the knowledge

This many people searched for this info: 738