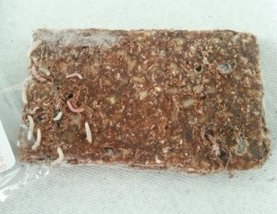 But first, let’s take a look at the picture our reader sent along with his question:

Clearly, several creatures have made their way into this bar, and we can only imagine our reader’s distress when he saw that his protein bar had even more protein than he realized.

Although this is a clear enough picture, we can’t examine the picture closely enough to exactly identify what he found. However, we can say that we are essentially certain he found some sort of larva, not worms (as we define “worms”), as there is nothing unusual about finding larvae in one’s food, alas. Larvae are immature forms of insects and various other animals. During the larval stage of the life cycle, a creature’s main function is to eat so that they can grow and develop into their adult form. They take this food where it comes, which is occasionally in places around the house like pantries in which food isn’t sufficiently sealed. We don’t know how the larvae made it into our reader’s protein bar, but at some stage in its production, hungry larvae found their way in.

Again, we can’t say exactly what our reader found, but the larva look a bit like waxworms and mealworms, two of the most common larvae people find in their stored foods. Waxworms are the larval form of Indianmeal moths, and mealworms the larval form of a species of darkling beetle (Tenebrio molitor, more specifically). We pick these out primarily because they are commonly found in foods, however. Lots of other larvae look like the creatures pictured above, such as maggots, to pick one example, which are the larval form of the various species of flies that belong to the Brachycera suborder.

Our reader might take some comfort in the fact that larvae are commonly eaten by humans around the world, like the Philippines, for instance. (This practice is called “entomophagy.”) That said, we’ll briefly note a couple of things we covered in our article about how safe it is to eat worms, which our reader can look at if he wants more information. First, the problem with eating larvae isn’t necessarily the larvae themselves; rather, it is what the larvae is carrying with them, which could potentially be various bacteria (not that the human body can’t withstand a great deal of bacteria). Second, it is always difficult to predict how someone will react to a foreign food source. Lots of things can upset a stomach, and food allergens are always a source of concern as well.

But these are just general reasons why you wouldn’t want to go around eating random larvae. There is a good chance the larvae will cause our reader no harm or discomfort, especially if the larvae were baked into the protein bar (because the high temperatures could have killed any bacteria in the larvae). However, we are not medical doctors and can’t offer any medical advice, and needless to say, our reader should seek medical care if concerning symptoms accompanied his eating of the protein bar. But as general, non-medical advice, we see no reason why our reader should panic.

Article Name
Small Worms or Larvae in Snack Bar (with Picture)
Description
A reader wrote to us a couple of days ago about some worms or larvae he found in a homemade protein bar.
Author
All About Worms
Share the knowledge

This many people searched for this info: 3,315