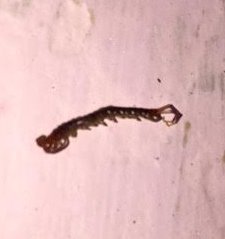 A reader wrote to us recently about a “scary looking really fast moving worm on my bathroom floor.” Emphasizing its speed once more, the reader reports that the worm, which is actually most likely a centipede (more on this in a second), “moved really fast even on a wet floor,” and also mentioned that it crawled up into the wall after it was spotted. The reader was quite startled by the worm (or centipede), and asked for our help. Obviously, we aren’t in position to help in any sort of direct way, but we can help with the matter of identification, and again we think our reader found a centipede, not a worm, for reasons we will now outline.

The reader sent two pictures of the creature she found, and here is the better of the two:

This is a little scary looking, although in the picture above it looks dead or mortally wounded, so at least its frightening appearance isn’t amplified by its speed.

Why do we think this is a centipede? First, even though its body is a bit maimed, the creature above appears to have the features of a centipede, the most notable of which is its many legs. These legs may be crumpled, but they still seem to line the creature’s body. It isn’t entirely clear which end is the creature’s head, but it appears to lie to the right, where there are two curled appendages that look like long antennae. If this is correct, the back end of the creature is obviously pointed to the left, where there appears to be a cluster of crippled legs. Moreover, the creature apparently moved quite quickly, and it ran for cover as soon as it sensed it was in danger, and these are both characteristics of centipede movement. Thus, for both physical and behavioral reasons, we think our reader found a centipede.

If you know your arthropods reasonably well (but not that well), you might wonder why we think our reader found a centipede and not a millipede, as there are many superficial similarities – lots of legs, antennae, and so on – between the two creatures. The two are closely related, but there are several characteristics that distinguish them from one another. For example, millipedes tend to have short antennae, whereas the creature above has longer antennae. The back legs of centipedes also trail behind them, and if the creature above weren’t crippled, it appears that its posterior legs would follow this pattern. In contrast, all the legs of millipedes are lined up with one another, and these legs can be hard to see because they often don’t extend beyond the millipede’s body. Finally, centipedes dart around quickly, whereas millipedes are quite slow. So, we have good reasons for thinking our reader found some type of centipede.

Again, the reader expressed some fear at what she found, and this is understandable, but in general finding a centipede from time to time is not cause for concern. Unlike millipedes, they can bite, but this is quite rare, and many centipedes can’t even pierce human skin. They also eat insects and other creatures that many consider pests in themselves, like spiders, so they have this going for them as well. So, for now, we recommend that our reader not worry about what she found because it doesn’t seem to be a part of any larger problem.

However, if she keeps finding centipedes, she can write to us again and we’ll give her some tips for getting rid of centipedes. She can also consult some of the many excellent resources online, like the University of Minnesota Extension Program’s guide to sowbugs, millipedes, and centipedes in the home. Depending on where our reader lives, a university in her area might also run an extension program, which may provide pest control materials that cater more to her specific location, wherever that may be.

Article Name
Scary, Fast Worm on Bathroom Floor
Description
A reader wrote to us recently about a "scary looking really fast moving worm on my bathroom floor." It is likely a centipede.
Author
All About Worms
Comments: 1 Posted by: Worm Researcher Evan Categories: Pest Worms