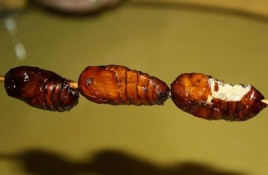 A reader recently wrote us a very concise and particular question: “What is a favorite worm meal for Filipino people?” That is the entirety of the reader’s email, so evidently the reader is only interested in the fairly limited matter of what insects are consumed in the Philippines. (Or we suppose he is technically interested in what worms are eaten in the Philippines, but we’ll have to broaden the focus a little to include insects in general.) So, without further delay, what type of insects or worms do Filipinos enjoy?

Although the very subject of this article – eating insects – may appear strange to many readers, entomophagy (the consumption of insects as food) is a widespread practice that we have written about before in connection to Phoenix Worms. Insects have also been eaten frequently throughout human history, so for much of the world and for much of history, eating insects has been par for the course. (Obviously, the consumption of insects is also common in the animal world, although the word “entomophagy” generally refers more narrowly to the human consumption of insects.) As our usage so far and the very word “entomophagy” suggests (from the transliterated Greek word éntomon, meaning “insect”), humans generally consume insects, not worms, at least if you adopt our definition of the word “worm.” According to an article about entomophagy serving as a partial solution to world hunger, the most commonly eaten insects are “beetles (468 species); ants, bees and wasps (351); crickets, locusts and cockroaches (267); and butterflies, moths and silkworms (253).” Worms aren’t even mentioned. (Silkworms are insect larvae, not worms, just for the record.) So, in those regions of the world where entomophagy is common, the focus is definitely on insects or insect larvae.

But, we can hear our reader ask, what about insects in the Philippines specifically? Not being experts on insect-eating in the Philippines, we are not in a position to say what the “favorite” insect of the Filipino people is. They eat lots of insects, and they eat different insects in different parts of the country. What insects are eaten also depends on the time of year. For instance, June beetles will attack rice and sugar cane crops, and when this happens, farmers will capture them at night (because they are drawn to bright lights) and later cook them and eat them, according to world-hunger article linked to above. Locusts, grasshoppers, and crickets are also caught and eaten when they attack crops. Ants and ant eggs are also consumed in the Philippines, although these are more like a delicacy because of their expensive price. Again, we aren’t sure what the preferred insect is, and perhaps there isn’t one. In most instances, people simply seem to eat what is in abundance around them, which is evidently the insects attacking their crops.

So, unfortunately, we can’t say what “favorite worm meal” of the Filipino people is, but hopefully we’ve at least partially satisfied our reader’s curiosity. He can now explore the culinary predilections of Filipinos with some guidance in mind if he so desires, and perhaps he’ll expand his research to include the many other countries in which insects are eaten.

Article Name
Eating Insects in the Philippines
Description
A reader recently wrote us a very concise and particular question: "What is a favorite worm meal for Filipino people?"
Author
All About Worms
Share the knowledge