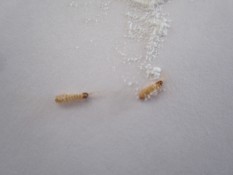 Worms in the Pantry (with Pictures)

A reader wrote to us a few days ago about some worms she is finding in her pantry. The worms in the pantry were found in a bag of rice flour that was purchased at a Chinese grocery store. The reader has researched the types of worms you find in pantries extensively, but has been unable to determine what she is finding. Fortunately, she included some excellent photos along with her question, so we are fairly confident we know what the worms in the pantry are.

First, here are a couple of the photos the reader submitted. The first depicts one of the pantry worms from afar, and the second shows two worms that are dead: 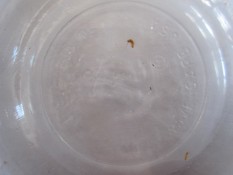 Given that the reader fairly extensively researched her question before submitting it to us, we suspect that she came across information regarding both mealworms and waxworms, two small worms found in food. Actually, despite their common names, neither one of these creatures is a worm. Mealworms are the larval form of a species of darkling beetle (Tenebrio molitor), and waxworms are the larval form of Indianmeal moths, which are also called “pantry moths.” Both creatures are typical “worms” that people find in their pantries, frightening homeowners and spoiling food. However, the reader placed a great deal of emphasis on the “antennae” that are on the creature’s head or tail (she wasn’t sure which end was which), and neither mealworms nor waxworms have this feature on their bodies; it is for this reason that our reader didn’t think she found mealworms or waxworms, or so we surmise. (The reader didn’t explicitly mention either creature – we are just assuming she came across these two possibilities since she researched the question herself.)

We probably would have thought that our reader found waxworms or mealworms, but for the pictures she submitted, which don’t appear to depict either creature. Rather, our reader seems to have found carpet beetle larvae, a creature we evidently will never stop writing about. (We’ve written about them many, many times before, and in fact we’ve even written about these larvae being in the pantry of another reader.) More precisely, we suspect she found the larvae of the black carpet beetle, which have slightly more elongated bodies than the larvae of the other two common species of carpet beetles – varied carpet beetles and furniture carpet beetles. The larvae of black carpet beetles also have long hairs on the tail end of their bodies, which is what the reader mistook as antennae. Carpet beetle larvae also tend to be a brownish color and have stripped bodies, just as the creatures pictured above do. In general, carpet beetle larvae feed on a variety of fabrics (e.g., carpet) and animal products (e.g., wool), but they will occasionally make their way into a pantry to eat grains or spices. Evidently, this is what happened with our reader.

We can’t be positive our reader found carpet beetle larvae, but a lot of facts point in this direction, and in any case the “worms” in the pantry are almost certainly larvae. And if this is the case, the reader shouldn’t need to worry about contracting any sort of parasite from the creatures, which is a concern she mentioned near the end of her email. The small larvae that people find in their pantries are not the type of worms that live in people’s bodies. In fact, in some parts of the world, people frequently eat larvae. Of course, if our reader is experiencing any unusual symptoms as a result of eating her rice flour, she should seek medical care, but she should not be overly concerned about her health because she found larvae in her pantry. Hopefully we have correctly identified what our reader found and eased her mind. We wish her luck addressing the larvae problem, and hope she won’t have much trouble getting rid of the larvae.