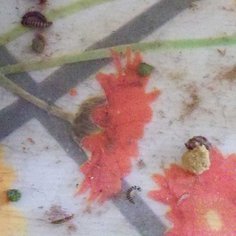 A reader wrote to us the other day about some small, striped worms she found by her cat’s food. The reader’s cat “doesn’t seem to carry worms on him,” and she has looked in vain for information on the worms she found. The reader is “kind of panicking right now,” and so she asked us a series of questions in rapid succession about the cat food worms: “Are these worms dangerous for humans? Are they dangerous for my cat? Do I need an exterminator? What are they? Are they parasites?” This is a lot of questions, but they are all wrapped up with the matter of identification – the “what are they?” part of the list of questions – and since we have a reasonably good idea of what the worms by the cat food are, all the questions can be handled more or less at the same time.

First, the reader sent in a good picture of the worms she found:

The original image was quite large and captured a lot more of the cat’s food tray, and thus showed more worms (about a dozen or so). However, rather than decrease the size of the image to fit it on the page, we picked a small part of the photo and expanded it to show the worms in greater depth (even though they are still fairly small). So, this photo doesn’t capture the reader’s situation exactly, but it does show the creature she found in the clearest way possible.

Unfortunately, this still isn’t especially clear, and often identifying tiny creatures hinges on small features on their bodies, but one thing we are basically certain of is that she found some sort larvae, and therefore not worms. (We used the word “worm” above just to keep with the reader’s usage.) We have actually answered a question about small “worms” in and around cat food before, and the answer we provided in that article applies more or less exactly to our present question: we suspect our reader found carpet beetle larvae or perhaps some type of flour beetle larvae (like a mealworm). Both larvae are commonly found in various foods (among other things) around the house, and both can be a brownish color with dark stripes.

In general, a small number of beetle larvae is nothing to be alarmed about, and their presence in our reader’s house is easily explained: they are presumably going after an easily accessible food source, which is essentially all larvae are ever after. So, these aren’t parasitical worms that afflict felines (like roundworms or tapeworms), but only larvae that have no necessary connection to cats. (We say no “necessary connection” because the presence of the cats isn’t totally irrelevant. Most obviously, there would be no need to set out cat food, which probably attracted the larvae, were there no cats around, and carpet beetle larvae feed on pet hair, but, again, beetle larvae aren’t parasitical worms.) The larvae should also cause no harm to humans, although the hairs of carpet beetle larvae can sometimes cause skin irritation. Thus, they shouldn’t be picked up, and there isn’t any reason to pick them up, even though they likely wouldn’t cause any damage.

All that said, we’ll conclude by saying that our reader doesn’t need to consider anything as dramatic as an exterminator at this point. Her focus for now should be on getting rid of the current batch of larvae and cleaning up as best as she can. We have tons of articles about removing larvae from your home, like our popular one about getting rid of carpet beetle larvae under your furniture, so we invite our reader to browse a bit to pick up some tips. Our reader might also consider where she is putting her cat’s food. Perhaps it is near a door, or someplace like that, where larvae would have an easier time getting into the house. The basic goal of our reader is to eliminate (as best as the possible) the easy food source that is presumably drawing the larvae in. If she manage this, and gets rid of the current generation she is dealing with, she should be ok.

Article Name
Small Worms with Stripes Around Cat Food Dishes
Description
A reader wrote to us the other day about some small, striped worms she found by her cat's food.
Author
All About Worms
Share the knowledge