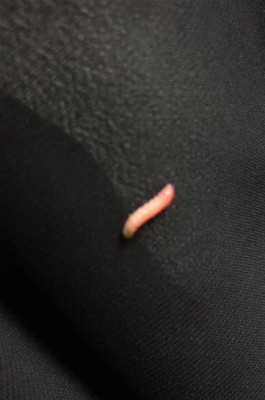 A man recently wrote to us after his wife found a pink worm on her polyester shirt. His guess is that the creature is a rice worm and wonders if it is harmful to his clothes or food. 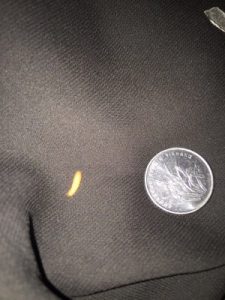 Firstly, we want to commend our reader for providing us with a vast assortment of visual information to go by. Not only did he provide us with the image above, giving us a size comparison between the worm and a Chinese dime, which is 19mm in diameter, according to our reader, but he also sent two videos of the creature crawling about.

Secondly, we wish to comment on the reader’s guess at the worm’s identity, a rice worm (the larval stage of a rice worm moth). Although the majority of its features do match that of a rice worm: its size, ridges, and black head, its color does not. Although the image above makes it seem as if the worm is yellow/orange in color, our reader described the worm to us as “pink and lovely”. We appreciate the positive sentiment toward this creature! This description matches with the videos sent in, where the worm does look more pink, as seen in the screenshots below. Either way, rice worms are typically white in color, so as to blend in with the rice they are commonly found in. For that reason, we do not think it is a rice worm. 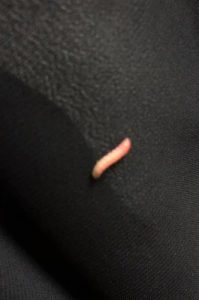 However, we do think our reader is correct in identifying this creature as a moth larva. Its size, body, and where it was found point toward this conclusion. Many common moths feed on textiles like the cotton and wool found in clothing. On the other hand, as our reader pointed out, the shirt it was found on, and where ?—what appears to be?— its cocoon was being constructed (see screenshot below), was made of polyester, which moths typically do not feed on, as it is a synthetic material. So, we think our reader is right in assuming that it may not have been feeding on this shirt, but it may have been making a cocoon. Yet at the same time, since it was found in his closet, it is still possible that it was a clothes moth larva. We recommend our reader and his wife check all their clothes for holes to see if this is the case! 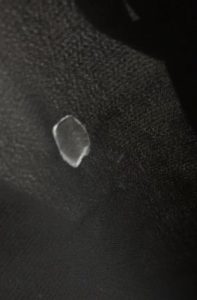 Unfortunately, not only is there is a multitude of species of moths that feed on textiles, but there is also an array of moths which are pink in their larval stage, and they all look similar to each other. For this reason, it would be difficult to pinpoint exactly which species of moth this is. Luckily, just as a lot of moth larvae look similar, on a basic level they all behave similarly as well!

For example, the pink bollworm moth larva feeds on textiles, and when it confronts a synthetic material like polyester, it will cut through the fabric in the hopes of finding something underneath that will fulfill their diet. Similarly, the Indian meal moth larva (also potentially pink in color), commonly found in the kitchen, can cut through plastic and cardboard containers to reach the food inside. So, to answer our reader’s question, it is possible that this larva is harmful to clothes and food, as they are pests and their diets often consist of textiles and food found in the household.

In order to prevent an infestation, we recommend our reader does a deep clean of his house, looks for any more cocoons, and seals off any possible points of entry for small insects and worms in the home. Furthermore, according to Environ Pest Control, vacuum sealing unused clothes and regularly vacuuming are also effective methods of actively working toward preventing moth infestations.

In conclusion, the pink worm found on our reader’s wife’s shirt is a moth larva. What species exactly, we are not sure, but there are general steps one can take to prevent any sort of moth infestation to protect one’s clothing and food, which we recommend for our reader! And otherwise, if an infestation is clearly already occurring in anyone’s household, seeking professional help is the best route to take.

Article Name
Pink Worm Found on Shirt is a Moth Larva
Description
A man recently wrote to us after his wife found a pink worm on her polyester shirt. His guess is that the creature is a rice worm and wonders if it is harmful to his clothes or food.
Author
Worm Researcher Anton
Share the knowledge