Thankfully, the reader sent us a picture, which is always great because then we can check our research against an image of the creature actually found. 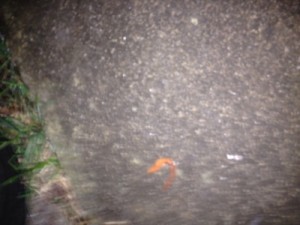 This isn’t the clearest picture, as you can see, but it at least shows that the creature our reader found is orange. That is about all we can tell, however. Its size isn’t entirely clear, nor is the shape of its body.

Depending on exactly where our reader lives, it is possible that she found a sandworm, which goes by the scientific name Hediste diversicolor. The sandworm belongs to the Phylum Annelida and the Class Polychaeta (the species that belong to the latter group are commonly called “bristle worms”). We are inclined to list this as a possibility because sandworms can be orange (as well as yellow and green), and moreover they are found around most British coasts, along with a few other coastal places in Europe. They are around 60-120 millimeters in length, which seems consistent with the creature pictured above (although we can’t be sure).

However, sandworms, and in fact all bristle worms, are aquatic, so we aren’t sure why our reader might have found one in her garden. On the other hand, Plymouth is on the coast, and it’s possible that our reader’s garden is right by the ocean. Also, sandworms are found in black, muddy sand, and the ground in the picture above looks a bit like this (or at least it doesn’t positively not look like this – it’s hard to tell). That said, sandworms are found in intertidal sand – that is, the seashore, where sometimes the land is above water and sometimes it is not – so the reader’s garden would literally have to be on the shore for our suggestion to be plausible.

There are of course other orange worms in existence, but many of them are aquatic (meaning that suggesting these as possibilities would run into the same problems as our sandworm suggestion). We were also able to find at least one terrestrial orange worm-like creature, the Schistometopum thomense, but these are found on islands in the Gulf of Guinea. So, our best guess is that our reader found a sandworm, although we of course can’t be certain. If any readers have suggestions, please leave a comment below.

2 thoughts on “Orange Worms in the Garden”