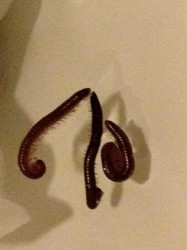 Creatures in Carpet with Two Legs per Segment

A reader recently sent a picture to us of two worm-like creatures that she found in her carpet in her home. Because of the two pairs of legs per body segment, it is very possible that these creatures are millipedes. 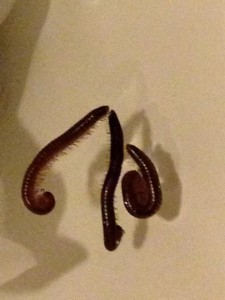 Millipedes are very common all over the world. They can pretty much live anywhere in the world with the exception of Antarctica. They are usually brown in color, but can also be black or red. They grow up to 4 cm in length.

Millipedes usually live in places where the soil stays very damp and in dark places that are often unbothered. During the heavier rainy seasons, many people will find infestations of millipedes in their homes. They can get in through air vents, cracks in the foundation, and basement doors and windows. Millipedes thrive in places like basements because they are very dark and usually do not get bothered.

The diet of a millipede is pretty simple. They usually feed on plant life that is decomposing and other organic matter. Some millipedes do feed on live plants and farmers sometimes are pestered by the ones that attack their crops. There are even some species of millipede that like to feed on live creatures such as snails and earthworms.

In summary, our reader more than likely has found millipedes in her home. They are not dangerous to her or her home and she can simply place them back outside if she wants them to be out of the house.

Article Name
Millipedes
Description
A reader recently sent a picture to us of two worm-like creatures that she found in her carpet in her home.
Author
All About Worms
Comments: 0 Posted by: Previous Author Categories: Gross Worms, Interesting Worms