Last month, we received a picture of a small brown worm (or small brown creature that looks a bit like a worm). The reader wanted to know what the small worm in the picture was. Another day, another question about small brown worms. Unfortunately, the picture of the creature in question isn’t particularly clear…at all. It appears to feature a curled up brown worm (although it could very well be some sort of caterpillar or larva), but that is about all we can tell. The picture isn’t accompanied by any additional information, such as where the worm (or caterpillar or larva) was found, which is very helpful to know when it comes to identifying worms or other worm-like creatures. Unfortunately, we can only offer a few guesses as to what this creature might be.

But before we do that, let’s take a look at the picture the reader sent: 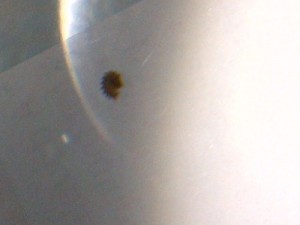 As you can tell, this doesn’t reveal much about the worm. However, as we said, the worm looks brown and small (although we can’t even be sure of its size because there is no scale in the picture), and that leaves us with a few guesses to offer.

The first is the moth fly larva, which we seem to write about on an almost weekly basis because we get a lot of questions about them. This suggests that they are found frequently, which in turn means that our reader very well might have found one; people find common creatures more often than they find uncommon ones, obviously. Moth fly larvae are quite small – they tend to be about a quarter of an inch in length (about six millimeters) – and they are often brown or grey in color. Moth flies and their larval form are found in moist places around the house. They are frequently found in or around drains (so much so, in fact, that they are often called “drain flies”) and pipes. If the reader found the creature pictured above in a place like this, perhaps she found a moth fly larva.

If the creature was found inside, but not in a moist place like a drain, it might be a carpet beetle larva. These creatures are also small and brown, just like the creature pictured above. They tend to be found in closets where they infest clothes or in the pantry where they infest food. Just like moth fly larvae, carpet beetle larvae are also quite common.

If the creature was found outside, the reader perhaps found a black soldier fly larva. The odds of this being the case would be especially high if the reader found the creature in a compost pile or in some other gathering of organic waste. (Black soldier fly larvae are actually recruited for composting operations because they convert high-nutrient waste into animal feed.)

Of course, any one of these creatures could be found inside or outside, so it is not the case that if our reader found the creature pictured above outside, it can’t be a carpet beetle larva, for example. However, we did list the areas where people seem to find these creatures most frequently (at least based on the questions we get), so that’s why we linked each creature to a particular location.

1 thought on “A Small Brown Worm”