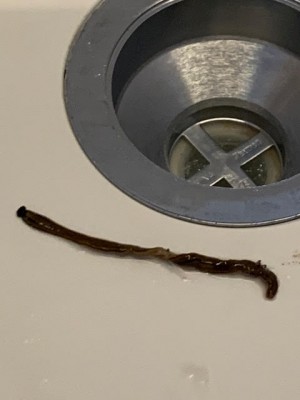 “My neighbor found this worm attached to her dog, wrapped around its leg,” says this reader about the creature displayed below. The worm is very long, black in color (with a gray underside), and appears to be a flattened, rather than tubular, shape. 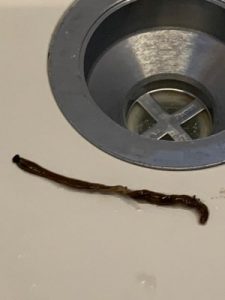 Our reader is based in Atlanta, Georgia and states that she was thinking the worm was either a “hammerhead (predatory) or shovel head (benign).” We hate to break it our reader, “hammerhead” and “shovel head” are just two names for the same thing, meaning they are the same worm. And of the two descriptions of the worm given by our reader, the first is true; hammerhead worms are indeed predatory. Either way, our reader is definitely correct in identifying this as a hammerhead worm.

Hammerhead worms, otherwise known as shovelhead worms, are terrestrial flatworms that originate in tropic regions, but can be found all over the world. There are tons and tons of species of hammerhead worms, not to mention the number of flatworm species there are. As previously stated, hammerhead worms are predatory, but despite this, they are not dangerous to humans or dogs whatsoever. The most they can do is irritate the skin if one comes into contact with the toxins that they secrete to harm their prey, which mostly consists of snails, invertebrates and other hammerhead worms. That said, we would recommend that our reader’s neighbor prohibit her dog from eating them as much as she can, as this could at the very least make the dog vomit. The worm was likely wrapped around the dog’s leg either by accident, or because there was another bug on the dog that the worm wanted to eat.

Despite its potentially unsettling appearance, the hammerhead worm is quite fascinating. It is hermaphroditic and is capable of both sexual and asexual reproduction, it has chemoreceptors on the bottom of its head that it can use to track its prey, and with its prey it is able to secrete substances that either paralyze or melt them. Yes, you read that right, melt. Of course, it is more of a disintegration, but the point is made nonetheless. Now, seeing as our reader already identified this as a hammerhead worm, we will not bore her with more facts in the case that she already has looked them up. That said, if she or her neighbor is interested to learn more, she is more than welcome to check out this past article we wrote on hammerhead worms.

To conclude, the worm our reader’s neighbor found wrapped around her dog’s leg is indeed a hammerhead worm. Whilst they are poisonous and very dangerous to the prey they hunt, this includes neither humans nor dogs. We hope that this article proves useful to our reader and that it helped put her neighbor’s mind at ease.

Article Name
Long Black Worm Found Wrapped Around the Leg of a Dog is a Hammerhead Flatworm
Description
"My neighbor found this worm attached to her dog, wrapped around its leg," says this reader about the creature displayed below. The worm is very long, black in color (with a gray underside), and appears to be a flattened, rather than tubular, shape.
Author
Worm Researcher Anton
Share the knowledge

This many people searched for this info: 2,414