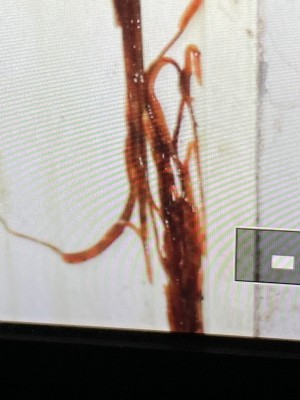 Hordes of Flat, Red Worms Infiltrate this Woman’s Back Porch in Arkansas

“How do I make them goooo?” asks this reader, who found hordes of these worms roaming and climbing the pillars of her back porch. The worms are red in color, extremely long, with virtually featureless bodies, and the images our reader sent in are a sight to see. 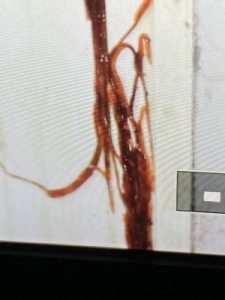 Our reader, who lives in Benton, Arkansas, found these worms after there was heavy rain. She asks that we help her identify the worms, tell her if they are harmful, and advise her on how to make them leave her property. We must admit, these worms have really stumped us. It is not unusual for certain worms to surface in big numbers after heavy rain, such as earthworms or red wigglers, both of which are composting worms that live in the soil and thrive in moisture, but these worms look like neither of those two species. While there are species of red earthworms, their bodies are characteristically round, while these worms’ bodies appear to be flat (especially in the photo above, where the worms are crawling up a pillar). Additionally, earthworms have clitellums (that band of thicker skin round their middle), while these worms do not. When it comes to red wigglers, although the color matches, these worms too are not round, and are nonetheless far too long to be red wigglers.
Red, Stringy, Long Worms On Back Porch

Given this information, we started looking into species of flatworms. Unfortunately we also came up short in this category. Besides hammerhead worms (who have a unique spade-shaped head which these red worms lack), there are not any species of terrestrial flatworms — that we could find — that are this red and this long. But even among the plethora of hammerhead species we could not find one that was this red of a color. Then, we considered that they might be horsehair worms or some kind of nematode, but the size and circumstances just do not add up there either.

What we advise that our reader does is carefully take samples of these worms (wearing gardening gloves, put them in a box with some air holes and soil) and bring them to her local county extension office to be identified. Someone who can physically handle the worms and get a closer look will probably have a better chance at correctly identifying these worms. Likewise, if our reader sent us more pictures of a higher resolution, then we would not mind having another go at identifying them. These photos admittedly make it a little difficult to discern the fine details of the worms that we might have missed. From the text and graphics on a couple of the photos, it seems as though these images are photographs taken of the original photos on another screen. If our reader could send us the original photos, then they would probably be in better quality. 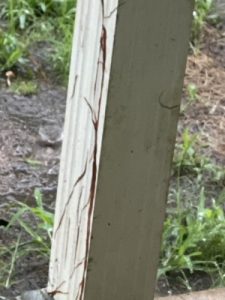 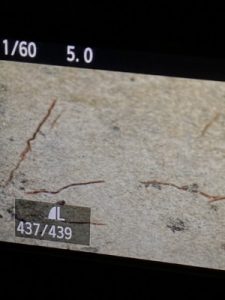 Either way, as we are not able to identify these worms ourselves, we can unfortunately not say with certainty whether or not these worms are harmful and how to control them. What we can say is that they do not resemble any parasite that commonly infests a human being; they are far too big for that. Of course, that does not necessarily rule out other ways in which a creature can be harmful. Hence, we still advise caution if and when handling these worms. Additionally, they seem to be similar to earthworms in that they surface from the soil during heavy rain. So hopefully, just like earthworms, the worms will return to the soil when the rain subsides. Though, since Arkansas is quite humid, we do not know how long that could take in this case.

In conclusion, we are not sure what these worms are. We have never seen anything quite like this, and while we marvel at this phenomenon, we also sympathize with our reader. We hope that if she brings the worms to her local county extension office she will get some answers as to the worms’ identity and how to handle them. It might turn out that our reader will require professional assistance to control these worms. We would be glad to hear from our reader in the future when she finds some answers, and like we said, she is welcome to send the original photos of the worms, or new ones for that matter. The best of luck to her!

Article Name
Hordes of Flat, Red Worms Infiltrate this Woman's Back Porch in Arkansas
Description
"How do I make them goooo?" asks this reader, who found hordes of these worms roaming and climbing the pillars of her back porch. The worms are red in color, extremely long, with virtually featureless bodies, and the images our reader sent in are a sight to see.
Author
Worm Researcher Anton
Comments: 0 Posted by: All About Worms Categories: Garden Worms, Pest Worms, Worms Generally