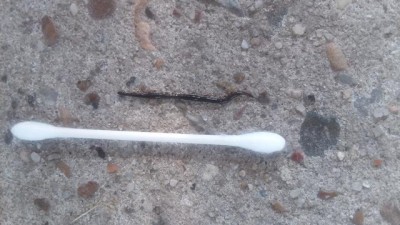 Worms That Appear After Heavy Rains are Harmless

A reader in southeast Texas recently sent us a message and some great photographs. She explained that it had been raining for days, and when it finally stopped some worm-like organisms appeared all over the concrete around her house and under the carport. Here is the first glimpse of one of these creatures: 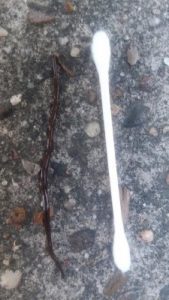 This specimen is a few inches long, dark brown, and has a lustrous texture. Our reader is very curious about what these worm-like organisms are. She is especially interested to find out if they are harmful or dangerous to people or pets. We are happy to provide some answers for our reader. Here is the next photo of one of the critters: 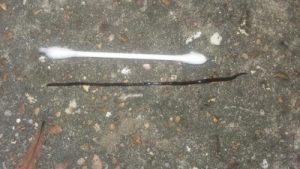 The specimen in this photograph has a very similar appearance to the creature in the first photograph. It has the same color and texture, but it is a tad longer than the first organism. So, what are these brown worms? This isn’t the first time we have heard about a ton of worms appearing after heavy rains. We identified the worms in that situation as earthworms, but we aren’t convinced that these are also earthworms. While earthworms can appear lustrous like the worms in the photo, they are not usually as dark colored. In fact they are often grey or pink, and they have segmented bodies. This worm doesn’t have segments like an earthworm: 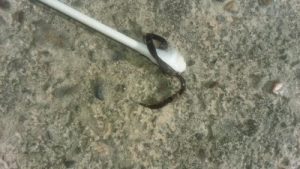 In this final photo, the positioning of the worm on the Q-tip makes us think that this worm might be flat rather than round. This clue, along with the body color and texture of the worm, leads us to believe that these worms could be flatworms!

Terrestrial flatworms, or land planarians, belong to the Geoplanidae family. These worms are very common in Texas, although they are considered an invasive species. They are predators of other invertebrates, but they are harmless to humans and pets. We don’t have an explanation for the sudden appearance of these worms after the rain storms, other than perhaps their habitat became flooded and they escaped to the concrete around our reader’s home.
In conclusion, one of our readers discovered tons of brown worms around her home after heavy rains. We think these might be flatworms!

Article Name
Worms That Appear After Heavy Rains are Harmless
Description
One of our readers discovered tons of brown worms around her home after heavy rains. We think these might be flatworms!
Author
Dori Franklin
Comments: 0 Posted by: Worm Researcher Dori Categories: Flatworm