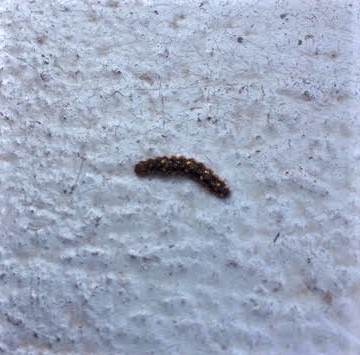 Tiny, black worms have been infesting the house of this reader, who wonders if we can tell her what they are. Our reader, who lives in Sri Lanka, describes the worms as being black and hairy, with a column of yellow dots running the length of its body, and being 1mm-1cm in length. 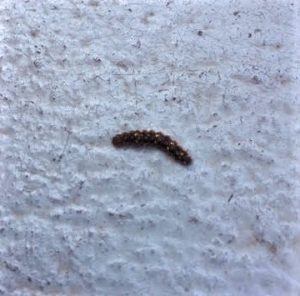 Our reader elaborates that she lives in a two-story house, and the worms were only noticed on the ground floor, about two weeks prior to sending in her query. The worms were first only found on the outer walls of her home, where they climbed upwards but “seemed to die pretty soon due to the heat.” A week later, the same worms starting falling from the ceiling on the second story of the house, where they also seemed to “sling web” from which they hung. She then adds that she sprayed pesticides to kill them, but they kept falling. Consequently, they consulted “a man to check the roof”, and he discovered a clogged drain pipe on the roof which was filled with a “million of these worms” which were “spreading all over above the ceiling.” The drain then got cleaned and more pesticides were used and yet the reader discovered even more worms falling from the ceiling. “We’ve probably used five cans of pesticides by now!” reports our reader. Lastly, our reader states that the worms seem harmless, but are a nuisance, and she is especially worried about her young children. She is worried that these worms may carry a parasite or crawl into her children’s ears while they sleep. 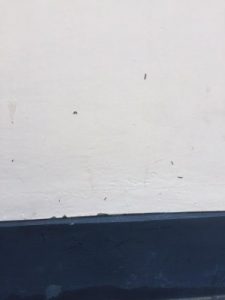 Firstly, we want to thank our reader for the considerable amount of context she provided, as well as the photographs which give us a clear view of the creature and its characteristics; this is always appreciated and is very helpful. Secondly, given the appearance of the worms, we would guess that these are caterpillars of some sort of moth or larva. This is due to the clear segmentation, the yellow pattern of dots, and the “hair” as our reader describes it. More specifically, out of all the moth and butterfly species commonly found in Sri Lanka, these caterpillars most resemble those of the scarce footman moth.

Scarce footman moths, when fully grown, are gray and yellow in color, the body and legs being yellow, but the wings, which can reach a mere wingspan of 3.5cm, are a light shade of gray. They usually inhabit moorland and heathy areas, but as most species of moths and butterflies, often stray and end up near human residences. They are commonly found in the UK, but have also been reported to be found in Sri Lanka. The larvae of these moths, which is what our reader found, primarily eat lichen, but also feed on moss and the leaves of certain plants. It is possible that a scarce footman moth laid her eggs in or near the water drain of our reader’s roof as lichen or moss was growing there, and she thought it would be a place fit for her larvae to feed and grow. And lo and behold, the mother moth was correct. Otherwise, scarce footman moths are not known to infest households. We also think that since the source of the caterpillars has been cleaned out, the caterpillars will stop coming from the ceiling soon. Additionally, it has not been recorded that scarce footman moth larvae carry parasites or crawl into people’s ears at night, though we cannot attest to this 100%. 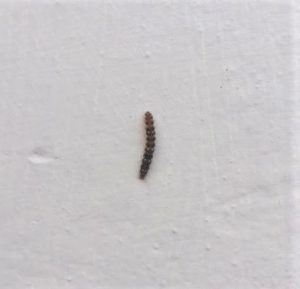 In conclusion, the caterpillars infesting our reader’s home are likely scarce footman moth caterpillars. Sources indicate that they are harmless, though of course one should be cautious when handling any creature. Even if a caterpillar is not prone to carry parasites or not venomous, it does not mean that people cannot react allergically to them, via touch or the mere presence of them. As we said, we are not absolutely certain about our identification of this caterpillar, and so if any of our readers have any other ideas as to the identity of this caterpillar, they should feel free to comment with their suggestions below. Otherwise, we recommend that our reader applies the aforementioned method of keeping one or two of the caterpillars in a container and letting them mature. We also hope that she can be free of these worms soon!

Article Name
Hairy, Black Caterpillars with Yellow Dots are Likely Scarce Footman Moth Larvae
Description
Tiny, black worms have been infesting the house of this reader, who wonders if we can tell her what they are. Our reader, who lives in Sri Lanka, describes the worms as being black and hairy, with a column of yellow dots running the length of its body, and being 1mm-1cm in length.
Author
Worm Researcher Anton
Share the knowledge

This many people searched for this info: 1,431