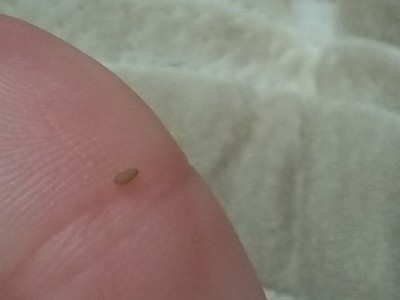 Green Worms Show Up in the Wake of Dog Tapeworms

A woman recently contacted us about discovering that worms were crawling on her and her mattress when she woke up for two days in a row. The worms appear to be somewhat oval in shape (though it could be the worm contracting its body to make itself smaller) and are described as being almost flat and a ‘greenish’ color by our reader. 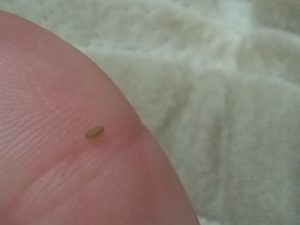 Our reader says that she has had bad experiences with bed bugs years prior, and that she is confident that these are not bed bugs. She adds that she also does not think they are flea larvae, given that the worms crawl rather than wriggle (see video linked below), and also that she recently had a “huge millipede fall.” Additionally, she has two dogs that sleep in the bed with her, and she has recently discovered that at least one of them has tapeworms. She worries that these worms might be related to her dogs’ tapeworm infestations in some way and that she is at risk of being infected.

First, it is vital that we point out that we will not be able to provide any medical advice, as we are not medical professionals. For this reason, we encourage our reader to not only treat her dogs according to her veterinarian’s opinion (as she has said she will do), but that she consults a medical professional and/or parasite specialist to get accurate diagnosis and proper treatment for herself.

Secondly, we have to admit that identifying these creatures has posed very difficult. Their size make it likely that these worms are at the underdeveloped stage of whatever insect they might turn into. They may be moth larvae, or young bed bugs, despite our reader refuting that possibility. One thing is for sure, they are not tapeworms. Tapeworms are parasites which feed on the nutrients inside one’s intestines; this is what her dogs have. As tapeworms do not have legs, these green worms cannot be tapeworms. We also wish to ensure our reader that she will not ‘catch’ these tapeworms from her dogs. According to Mental Floss, the way that tapeworm ‘babies’ are spread is by consumption of the eggs by another animal. For this reason, tapeworms are not contagious. But we still urge our reader to treat her dogs with haste, as her dogs are likely not comfortable being hosts to these parasites.

Furthermore, we do not think this bug is a millipede either. This is given away by the worm’s uniformity in skin texture. Millipedes are arthropods and thus have a hard, segmented outer shell, which clearly these worms do not possess. We do not either think these are young bed bugs. These worms more resemble larvae, and bed bugs do not really have a larval stage. When newly hatched, bed bugs are referred to as ‘nymphs’. They already have legs and the round body of the bed bug, and are usually white/yellow in color, and do not resemble the worm in the photo. It could possibly be a species of clothing moth larvae, which feed on fabric, which would explain why they would be on our reader’s bed. However, they do not resemble any moth larva commonly found in households.

Unfortunately, we doubt we will be able to provide our reader with an answer as to the identity of this worm. The most we would be able to say is that it is probably a larva in its early stages, given its size and lack of physical characteristics. If she wishes to, our reader could put a few of the larvae in a container with air holes and food to see what they develop into, and then get back to us when they have grown.

However, we can provide some general advice that should suffice in ridding her bed of these worms. She will first want to locate the source of the worms. Check underneath the mattress, underneath the bed, or somewhere close to the bed that is cramped and dark. This is a popular spot for insects to hide. Once the source is located, all eggs and larvae should be vacuumed up. Following this, all sheets (and nearby fabrics to be sure) should be laundered in very hot water to kill any remaining organisms. If this does not prove successful, and our reader finds that these worms keep reappearing, then we encourage her to seek professional help in identifying and dealing with these curious, green worms.

In conclusion, we are unfortunately not able to confidently identify these tiny green worms as anything that can be commonly found in the household and would infest a bed. However, as previously stated, we encourage our reader to treat her dogs for their tapeworms, and that she follow the instructions above to rid her bed of these green worms. Best of luck to our reader, who we hope has found this article helpful.

Article Name
Green Worms Show Up in the Wake of Dog Tapeworms
Description
A woman recently contacted us about discovering that worms were crawling on her and her mattress when she woke up for two days in a row. The worms appear to be somewhat oval in shape (though it could be the worm contracting its body to make itself smaller) and are described as being almost flat and a 'greenish' color by our reader.
Author
Worm Researcher Anton
Comments: 0 Posted by: All About Worms Categories: Dog Worms, Tapeworm, Worms Generally