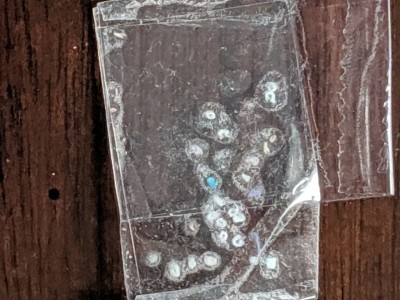 A woman reached out to us about a curious case of worms she cannot figure out. The worms, which she found in her home, appear to be minuscule in size, curled up in a ‘U’ shape, but come in two different colors. Our reader found both white and black/brown worms in her home. 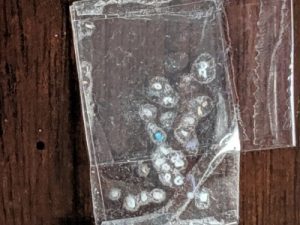 According to our reader, her house is currently already being treated for bedbugs, but that afterwards, she found “a lot of other weird ‘specimens'” in her home that she is unable to identify. She says that she has experienced allergic reactions in conjunction with the discovery of these specimens, and that she has been getting some pinpoint bites. Pest control has informed her that they are not bedbugs, but they are not sure as to the identity of the species either; they guess that they could be larvae, but that they appear dead. Additionally, our reader added that the worms feel grainy to the touch, and that she finds multitudes of them on different days hidden inside clothing. They are not all the same color and do not “cling like pilling.” To the naked eye, they look like “specs of coarse pepper or very coarse salt”. Our reader adds that she is on Prednisone and Benadryl, which we assume is to combat the allergic symptoms she has been experiencing.

Before we get into the meat of the article, we have to stress that because this situation is medical in nature, we cannot give much information as to the identify of the worm, nor advice pertaining to how to treat this problem. As we are not medical professionals, we are simply not equipped, nor qualified to give out this sort of information. We encourage our reader to consult more people other than pest control, including medical professionals and/or parasite specialists in the case that these worms are parasites of some kind. From these people will she be able to receive proper diagnosis and treatment. To consult a parasite specialist, Google search for “infectious disease physician (name of her city).” 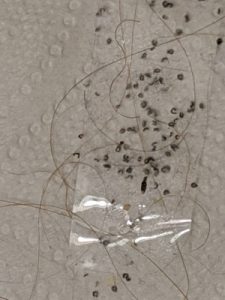 Furthermore, as we cannot give our reader a concrete identification of the worm, we can only give some general information and advice that we hope will be at least moderately helpful. First of all, given the size of the worms, we would assume that they are the larvae of some bigger creature. Normally, worms/larvae are not this size unless they are underdeveloped, or some kind of parasite; nematodes definitely came to mind, though we cannot say anything for sure, as previously stated. Secondly, we recommend handling these worms with caution. Our reader mentioned how the worms felt to the touch, but we would suggest not making skin-to-skin contact with them, in the case that they are parasitic, venomous, or a risk of causing allergic reactions (which it seems they are). Despite them being dead, any left over toxins that they potentially could have excreted through their skin could remain. Thirdly, we encourage our reader to put some samples of these larvae in containers with air holes and some organic matter, just to see what they might develop into. Perhaps separating the white from the black/brown worms may prove them to be different species?

To conclude, the salt and pepper sized worms our reader found in her home are difficult to identify given their size and the odd context in which they were found. We are not sure as to the link between these worms, nor are we sure why they may have caused the allergic symptoms that our reader has been experiencing. As we are not medical professionals, we cannot even begin to try to make that connection. Hence, we urge our reader to consult a medical professional, a parasite specialist, and perhaps even another pest control company to receive as many opinions as to what these creatures may be. Following the advice of keeping them in containers and letting them grow may also make it easier for these professionals to give her an accurate identification and the help she needs.

Article Name
Allergy-Inducing Worms the Size of Salt & Pepper Show Up in the Wake of Bedbugs
Description
A woman reached out to us about a curious case of worms she cannot figure out. The worms, which she found in her home, appear to be minuscule in size, curled up in a 'U' shape, but come in two different colors. Our reader found both white and black/brown worms in her home.
Author
Worm Researcher Anton
Comments: 0 Posted by: All About Worms Categories: Interesting Worms, Worms Facts, Worms Generally